Normally August isn't the best month for catching shallow water fish, but since our region has had cool temperatures for this time of year (80s and 90s), the shallow water fishing has been really good. I fish exclusively with live croakers, since speckled trout, redfish, and flounder all will eat them. We primarily fish grass beds, sandbars, and around piers with a No. 1/0 Eagle Claw Plain Shank hook. We hook the croaker in the nose or the tail and cast it out on a free line (no sinker, float, or swivel). I like 12-pound test line, because it casts well, and it's strong enough to hold any of the fish we catch.

Right now, we're averaging 15-20 trout a day, weighing 2-5 pounds each. The biggest trout we've landed so far this summer weighed about 6-1/2 pounds. This style of fishing and the areas we fish should produce speckled trout, redfish, and flounder until the end of September or the first of October. These fish will stay in open water, until cold fronts force the shrimp into the creeks, rivers, and estuaries that feed the bays. Then I generally will move to the west and start fishing the creeks and rivers feeding Mobile Bay with my three favorites – Bon Secour, Fish, and Magnolia rivers. We'll be able to fish these creeks successfully until about January. On an average 4-hour trip right now and next week, I expect my party to catch 15-25 speckled trout, 2-6 redfish, and a few flounder. 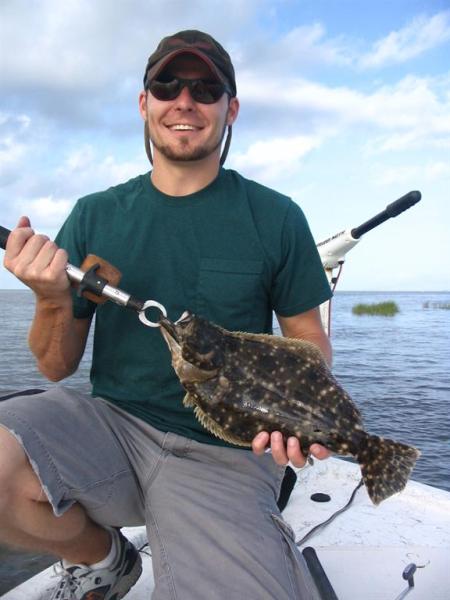