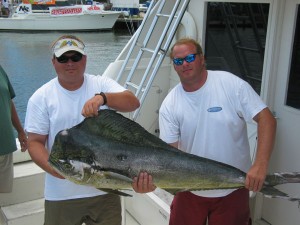 Baldwin County anglers who participate in the jackpots and cash-prize divisions in the Alabama Deep Sea Fishing Rodeo (ADSFR) will get a travel break this year.
The 81st annual rodeo, the largest fishing tournament in the world according to Guinness

World Records, will have an Orange Beach location at J&M Tackle on Canal Road for its captain's meeting and sign-out for the Pronto Pawn King Mackerel Jackpot and the Raymarine Big Game Jackpot. Boats entered in the cash-prize divisions in those two jackpots, as well as the Carolina Skiff/Sunrise Marine Speckled Trout Jackpot, must sign out to participate.

Gene Fox, the 2014 rodeo president, said adding the Baldwin County location for a captain's meeting just made a lot of sense.

“Now, if they can't make it to J&M during the meeting, they will have to come to Dauphin Island. We'll be up all night selling tickets and signing out boats until the cannon goes off at 5 a.m. to start the rodeo.”

The other big news for the 2014 ADSFR is that red snapper is back, thanks to a special season implemented by Gov. Robert Bentley and Conservation Commissioner N. Gunter Guy Jr. The special season opens fishing in state waters for red snapper and gray triggerfish on weekends during July.

Because the decision to open red snapper in state waters came so late, the ADSFR wasn't able to include snapper in its 30 regular fish categories.
“We've added a special random drawing snapper category,” Fox said. “Anglers can bring in two red snapper per day, the legal limit. Each fish counts as an entry. We'll have three winners for different prize packages.”

The red snapper weighed in at the rodeo will also be checked by the University of South Alabama Marine Sciences representatives to compile catch, size, and age data.

There is one caveat for snapper fishermen during the rodeo. The Alabama Legislature passed a bill that extends state waters to 9 miles for purposes of fisheries management. However, federal authorities currently recognize a 3-mile boundary for Alabama state waters.

The rodeo attracts anglers from all over the nation with an average participation of around 3,000 anglers, who fish Alabama's inshore and offshore waters in search of big fish that can win big prizes.

Fox thinks that the snapper special category will be an added incentive to get the anglers out for the rodeo.

“People want to go catch some snapper anyway,” he said. “Why not fish the rodeo and have a chance to win some really great prizes.”
Visit www.adsfr.com for more information.