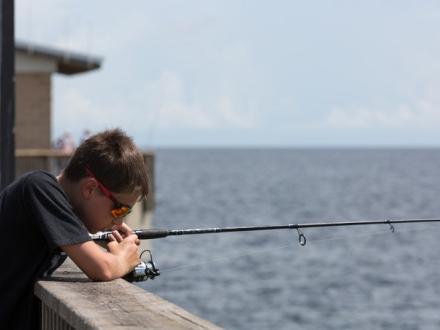 With the weather moderating after a windy start to spring, fishing at Gulf State Park Pier should be hitting its stride. Last week’s front with high winds roiled the waters a bit, but conditions should improve this week and continue to get better and better.

Head to the midway point of the Gulf State Park Pier to take advantage of Spanish mackerel migration.

The Gulf State Park Pier juts prominently 1,542 feet into the scenic waters of the Gulf of Mexico, and that length allows a variety of anglers and fishing techniques successful access to the Gulf’s fishing bounty. The pier’s 2,448 feet of fishing space along the rails at the pier in Gulf Shores is unmatched on the Gulf Coast.

With a relatively mild winter, the sheepshead fishing has been fairly consistent on the pier when the wind hasn’t been a problem. A fairly small hook hidden in a piece of fresh-dead shrimp or fiddler crab dropped down near the pilings will usually do the trick.

Dustin Hayes of Top Gun Tackle, which has a bait shop on the pier, said that anglers are also having luck on the shallow end of the pier for whiting and pompano. A piece of that fresh-dea
d shrimp, again with that hook hidden as much as possible will yield some of the best eating fish on the pier. Whiting are relatively small but their white, flaky fillets are delicious. The same goes for the Florida pompano, which have been larger than normal this fishing season.

As anglers ply the Gulf waters farther out on the pier, the species change with the depth of water. The pier is separated in sections by an octagon in the middle with a fish-cleaning station and restrooms. The mackerel migration has begun, and Spanish mackerel have been regular catches at the pier in that section of the pier from the second sandbar to about 100 feet past the first octag
on. Anglers are using Gotcha plugs and bubble rigs to catch the Spanish.

Hayes said the live bait still isn’t very plentiful but the Sabiki rigs and bait ribbons are starting to disappear from the shelves, which means it shouldn’t be much longer before anglers can catch their own bait.

“There’s some bait out there, but it’s hard to tell how much the way the wind has been blowing,” Hayes said. “Now that the weather has calmed down, it should be getting better soon.”

The large octagon on the end of the pier is where the die-hard pier anglers hang out in search of king mackerel and cobia that are migrating past the pier on their westward journey.

The kings have been hitting cigar minnows. Kings have plenty of teeth so be prepared with a leader made of 40-pound mono or light Sevenstrand wire.

Most of the cobia (also known as ling and lemonfish) have been caught on cobia jigs because trying to cast anything else at the roaming cobia ends up in frustration.

“If you spot a cobia, you’d better get that jig in front of his face or somebody else will beat you to it,” Hayes said. “There are some guys out there that can bomb a cobia jig 150 yards.”

For those planning to visit the coast, just bring your bass fishing gear to have fun on the pier. If you fish anywhere on the pier except for the octagon on the end, all you’ll need is a seven-foot rod in medium to medium-heavy strength with 12- to 15-pound monofilament line. Make sure the reel will hold at least 150 yards of line. Stop by the tackle shop and grab a couple of leaders, hooks and bait, and you’ll be ready to go.

You’ll need a fishing license and a pier pass to begin your quest for the entrée for dinner. Several restaurants in the Orange Beach-Gulf Shores area offer Hook-and-Cook specials and will serve up your catch in the most delectable ways.

Check out Gulf State Park Pier for more about fishing and opportunities to learn about the Gulf Coast ecosystem on one of the Gulf’s premiere piers.