Making a New Year’s resolution to catch more or bigger fish is probably pretty standard for most of us. For me, I am resolving to take better pictures of the fish and the anglers who catch them. 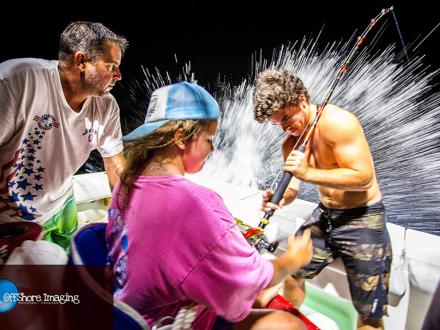 I seem to struggle taking good pictures offshore. I don’t have a photography background or a fancy camera. I need some basic tips so I can just point my iPhone and improve my picture taking so I called an expert.

Local photographer Jack Snow of Offshore Imaging takes some of the best offshore pictures I have seen. His work has been published in national fishing magazines and is regularly featured on local tournament social media sites. He’s a pro and obviously has professional equipment and years of experience. I am not looking to get to that level. I just want to improve my picture taking which shouldn’t take much.

Jack started me with the basics. “The sun is your friend. Always have the sun shining on your subject,” he said. “Take a moment to re-position the boat if needed, so the sun is behind the person taking the picture and directly on the subject.”

Snow says to keep a wide angle when shooting on the deck of a boat. This brings as much into the photo as possible such as the water in the background, possibly a rig in the distance and the scene on the boat at the time of the catch.

Where I have continually struggled is trying to capture that great action shot of a pelagic fish, all lit up, still in the water at the side of the boat. Partly because there is so much going on at that time and I am either running the boat, wiring the fish or preparing to gaff the fish. Adding picture taking to my duties just isn’t possible at that time. Snow said I need to work a little smarter when that time comes.

Almost every boat has a GoPro or two or three onboard these days. I usually have one going on my head to record video. Snow said a great way to capture those boat side still shots is to use a GoPro, but change the settings to utilize the ‘Burst Mode.’ This setting produces frame by frame images, up to 30 pictures per second greatly enhancing your chances of getting the shot you are after. Snow recommends mounting the GoPro on a pole or on one of the many mounts available, so it is pointed back towards the action. Make sure you can still reach to turn the camera on or use the GoPro remote functionality.

For pros like Snow, he is more interested in quality over quantity of pictures. But for amateurs like me, I need to take a lot of shots in the hope of a getting a few good keepers. Just like fishing!