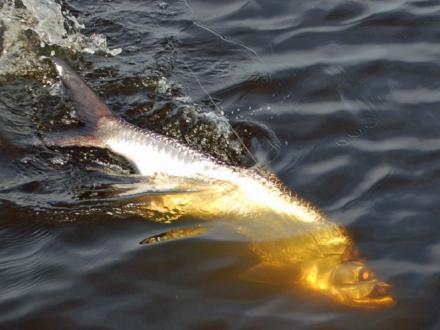 One of the great aspects of living or visiting the Alabama Gulf Coast is experiencing the marine environment and the vast number of species that hang out just off Alabama’s sugar-white sand beaches. Of course, plenty of people get excited when a pod of bottlenose dolphins swim within view, surfacing and diving as the crowds watch in amazement.

What gets anglers excited this time of year is another species that will come “rolling” down the beaches and estuaries on the Alabama coast. This species is known as the silver king, tarpon to be exact.

Most anglers consider the tarpon the ultimate game fish in terms of enticing a strike and the ensuing epic struggle as the fish leaps skyward to try to regain its freedom.

Tarpon don’t hang around Alabama during the cooler months but come looking for the bountiful baitfish that swim in Alabama waters when summer rolls around.

Schools of rolling tarpon can be spotted along the beach from Perdido Pass all the way past Fort Morgan as the fish blast through baitfish balls of menhaden and alewives.

Tarpon fishing fanatics head to the Gulf beaches every chance they get to search for rolling tarpon.

Because Alabama is not a tarpon nursery ground, the fish that show up on the Alabama Gulf Coast are usually at least 60 pounds and sometimes heavier than 100 pounds. The estuaries will hold a few smaller tarpon but not many. Anglers on the Gulf State Park Pier will often spot and sometimes hook tarpon this time of year, but don’t try to haul the fish onto the pier. A $61 tag is required to keep a tarpon, and it has no food value. So enjoy the fight and break him off when you get the fish close to the pier.

When anglers running along the front beach spot a school of tarpon, they race in a wide arc around the fish and cut the engine about 200 yards in front of the school to get ready to cast when the school approaches. And be sure to cut off the baitwell pumps and sonars to keep from spooking the skittish fish.

If the tarpon have been in a biting mood, it’s possible to toss a live menhaden, mullet or alewife in front of the school and watch one of the fish inhale the bait. However, some anglers go an extra step to hopefully add to the enticement by chumming with chunks of baitfish that will leave a slick behind the boat. Live baits under corks or balloon rigs can be floated along the chum line.

When it comes to equipment, it’s going to take a rod and reel that can handle the pressure. You’ll need a 7- to 8-foot medium heavy spinning rod and reel that can hold at least 300 yards of 20- to 25-pound test line. A 6- to 8-foot section of 100-pound monofilament or fluorocarbon leader will serve as a shock leader when the tarpon leaps for the sky and crashes back down into the waves. Most tarpon anglers will use large circle hooks ranging from 10/0 to 16/0, and they’ll let the circle hook do what it’s designed, hooking the fish in the corner of the mouth.

When the tarpon feels that hook, it heads skyward, and as all tarpon anglers know, it’s time to point the rod straight at the fish and bow to the king.