3 Crafters & Artisans You Should Know on Alabama’s Gulf Coast

Whether you want to snag a souvenir or support a local business, here are three crafters and artisans you should know in Gulf Shores and Orange Beach.

The Alabama Gulf Coast is far more than a beautiful beach destination. The area is brimming with unique coastal culture, especially in the art scene. From landscape paintings to custom candles to terrific textile arts, there’s no shortage of stunning creations you can take home - and they’re all made by the hands of local talented crafters and artists.

Of course, art is often open to interpretation, but it never hurts to peek into the mind behind the method (and the magic). Whether you want to snag a souvenir or support a local business, here are three crafters and artisans you should know in Gulf Shores and Orange Beach. 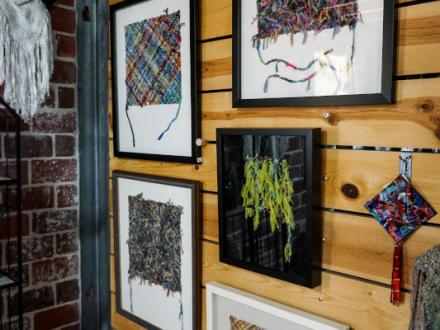 Celia Dionne is the owner and artisan behind Clara’s Loom and Coastal Textile Center. This art facility celebrates the textile arts through classes, unique crafts and accessories, studio spaces, and more. She began weaving in 1977 when a handwoven gift for her college graduation inspired her to take up the craft as a source of joy and continuity. After attending many workshops by world-renowned weavers and spinning her own sheep’s wool, she purchased an antique loom and set up shop in Franklin, Tennessee. Celia spent several years participating in Gulf Coast craft shows before moving to the Gulf Shores area in 2007.

Celia most enjoys indulging herself with color and texture, though she loves all the various tasks required for weaving and fiber art, from design to execution and even marketing. As a craftsperson and an entrepreneur, she strives to raise public awareness of fiber art through participation in art shows, craft shows, art centers, retail shops, and her own venue. When she isn’t weaving or running her business, Celia also enjoys gardening and is also a dedicated Francophile, thanks to her French father.

“This ancient craft is alive and well, if not well-recognized. Focus on what you specifically like and want to learn and establish your goal. Visit and talk to a weaver. Take a class. Read. Use the internet wisely. Above all, add texture to your life.”

Local artist Nick Cantrell has always had a passion and talent for drawing, but his studies became more serious after surviving a blood clot in his right arm at age 20. Longing to spend more time with his family and pursue his passion for art, he earned a BA from Auburn University in 2001 and began his career in Asheville, North Carolina. An Alabama native, Nick and his wife, ceramic artist Maya Blume-Cantrell, moved back to the Alabama Gulf Coast in 2004 (just in time for Ivan).

Nick now specializes in batik watercolor, a unique painting technique that combines melted wax with watercolor pigments on rice paper. His paintings are largely based in nature, and he loves obtaining inspiration by finding new places that make him feel so alive he must capture and share it. Reveling in and rendering nature’s beauty is a true pleasure for Nick, and he hopes his art helps spread awareness and raise interest in nature and its preservation. To that end, he also serves on the board for Friends of the Bon Secour National Wildlife Refuge and Friends of the Arts in Orange Beach.

“Work hard and try to distinguish yourself and your style from that of others. Play with unusual materials. If you use different materials than everyone else, you’ll naturally have a different result.” 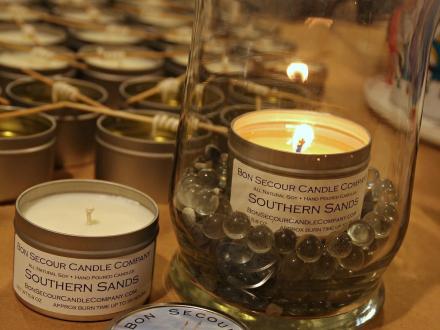 Bon Secour Candle Company isn’t Tara Gifford’s first - or only - artistic endeavor, but it’s certainly her most aromatic. She purchased the local candle company in 2019 after two decades running her own jewelry shop, Blue Girl Beading Co., where she offered classes, did jewelry repairs and sold her custom creations. After learning the ropes of candle creation from former owners Lynn and Mike Jordan, Tara took over Bon Secour Candle Company as owner and chief candle creator and has been making custom candles and wax melts ever since (though she still enjoys silversmithing in her spare time and sells her stunning designs online).

Today, Tara continues to lead Bon Secour Candle Company in creating small-batch soy candles and wax melts that are hand-poured for the highest quality. She enjoys creating magical new scents (though she could do without the complex math involved). When she isn’t growing her business or honing her silverwork, Tara loves living on the Gulf Coast as she raises her teenage daughter and two fur-babies.

“Testing, testing, testing! Candle making is not just about melting wax and pouring a scent in. Many factors come together to get the perfect candle: size of the wick versus size of the container, temperature of the wax when adding scent, and mixing well for a certain amount of time. There really is a lot of science involved!”