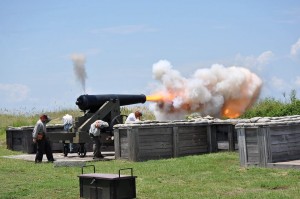 of the Battle of Mobile Bay. Be a part of this historical event Aug. 1 to 3 at Historic Fort Morgan. Event kick off is Friday, Aug. 1 at 6:30 p.m. with the Artillery Firing at Water Battery. Close out the night while enjoying Civil War-era tunes by Montgomery native Bobby Horton. Enjoy a full day of activities on Saturday, Aug. 2, followed by a siege and surrender on Sunday. There will be period music and demonstrations, as well as food vendors. Parking will only be available onsite for those arriving by Mobile Bay Ferry. Shuttle service will be available for a nominal fee. Shuttle service will begin from Pelican Place Shopping Center and Faulkner State Community College, both in Gulf Shores. The cost of the shuttle is $4 per person, each way. Gates will open at 8 a.m. each day. Admission for adults is $10 for a single-day ticket, ages 6 and older; $20 for a three-day pass, ages 6 and older; $30 for a single-day ticket, family of four; $65 for a three-day pass, family of four. Schedule at a Glance Friday 6:30 p.m. Artillery Firing at Water Battery 7 p.m. Period music performed by Bobby Horton Saturday 9 a.m. Commemorative Ceremony and Military Salute 10 a.m. Naval Battle Noon – 4 p.m. Siege of Fort Morgan Infantry Battle, including sortie and Artillery 8 – 9 p.m. Grand Bombardment with Artillery and aerial pyrotechnic explosions SUNDAY 10 a.m.–1 p.m. Siege of Fort Morgan Infantry Battle including artillery 1 – 2 p.m. Surrender ceremony with a special salute to the colors