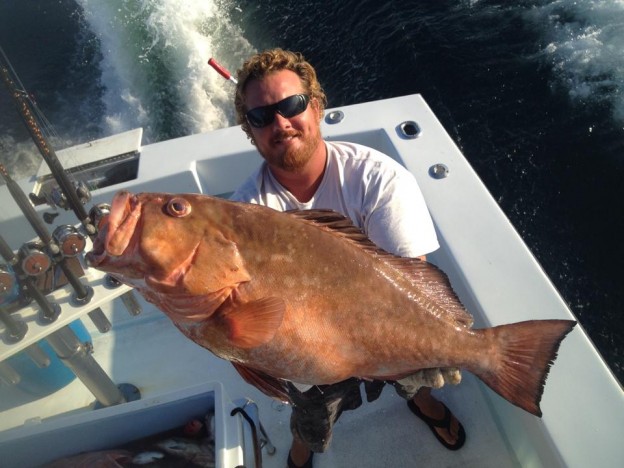 There is a popular post going around social media that is a fun play on the ‘Most Interesting Man in the World’ television commercial. It features the actor’s picture and says “I don’t always tell people where I fish, but when I do, it is a lie.” I wouldn’t say fishermen lie per se, maybe we just aren’t as forthcoming as some would like.

Maybe the least forthcoming would be those fishermen who are dialed in at catching grouper. Many of us can fill a box with snapper, but becoming proficient at catching grouper, well that’s a whole different skill set. I have always admired those who could catch grouper on a regular basis, like Captain Bobby Kelly on the charter boat Miss Brianna.

“You have to be very patient and committed to catching grouper,” said Kelly. When he goes grouper fishing, he does just that and nothing else. He’s not looking for a mixed bag of fish, he’s targeting red grouper, gag grouper and scamp. “When we set up on the spot, we are going to stay there and catch the grouper if they are there. You have to put the time in.”

Groupers live in deeper water than our other reef fish, and they like natural structure. Rocks, ledges, and drop offs are prime grouper holding spots. “I don’t start looking for spots until I am in at least two hundred feet of water,” said Kelly. “Our part of the Gulf of Mexico drops off quickly when you reach that depth and, as a result, the rocks and ledges of limestone will show up on your bottom machine. You have to use your electronics to find spots that hold the fish.”

Unlike when you are looking for a snapper spot and you want to see your depth finder loaded with fish, Kelly says he is not nearly as concerned with marking fish as he is the structure. Grouper are going to be on the bottom, so they are not going to mark up on the screen high in the water column. “If you see loads of fish on the spot, you are not going to get your bait to the grouper if they are there, so just move on to another spot.” For bait, Kelly says ‘anything that wiggles’ is prime bait for scamp and gags, but red grouper prefer dead or cut bait. A whole butterflied fish is the bait of choice for red grouper.

Pulling up a grouper from more than 200 feet is just one part of what makes catching a grouper so rewarding. “I fight to make sure I always have grouper on the menu,” said Executive Chef Bill Briand from Fisher’s at Orange Beach Marina. “Grouper is just the best fish to serve. We talk about it being like a cloud. It’s white, soft, and thick, and when it’s prepared correctly, it flakes like crab meat.” Briand says sautéed in a brown butter sauce is his favorite way to prepare fresh grouper. “Get the fish crispy on one side and then flip it over and baste with butter and little fresh thyme.”

Like so much of the fishing along our coast, this fall is setting up to produce some great grouper catches. “Red grouper goes out Sept. 16, but we can still catch the scamp and gags throughout the fall, and the fishing will only get better in the coming months,” said Kelly and that’s no lie!