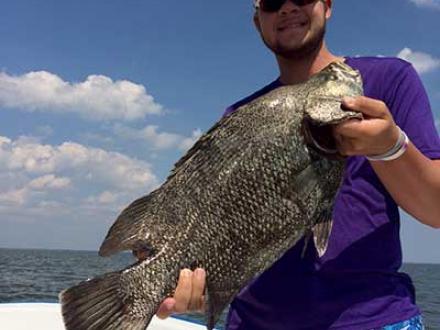 Thankfully, the heat wave has finally abated for the time being, and Gulf Coast temperatures are not nearly as oppressive.

But it’s August in Lower Alabama, and it’s still hot. The upside to the heat is an opportunity to catch one of the most prized fish species that inhabits coastal waters this time of year – the blackfish or tripletail if you prefer. The tripletail moniker comes from the fish’s fin configuration that makes it look like it has three tails.

When that heat starts to get to you and sweat starts rolling down your face while you’re sitting on your favorite fishing hole, it’s time to crank up that high-horsepower air conditioning system and go for a little boat ride.

When the water warms up, blackfish migrate into the inshore waters and can be found around any kind of structure that offers shade. Sargassum grass provides cover for tripletails while they’re out in the open water of the Gulf.

When that grass moves to the shore, they will look for cover wherever they can find it.

That means channel markers, buoys, crab trap floats or any other flotsam are targets for anglers who are looking to catch blackfish.

How to Fish for Blackfish

Many anglers cruise along in the coastal waters, checking the structure for any shadows lurking near the shade. Once a fish is spotted, try to make as stealthy a cast as possible. Live shrimp under a slip cork is the traditional method to catch blackfish. Flip the bait in front of the fish and watch for the fish to head toward the bait. Every once in a while, you’ll find a finicky blackfish that refuses to eat for whatever reason. It’s best to leave it alone and come back later in the day to see if the fish is hungry.

A buddy of mine found a hungry blackfish the other day, and the fish signaled its intent to feed when it suddenly changed colors to an almost white hue. Even though the cast was not the best in the world, that fish made a beeline for the bait, and the 16-pounder ended up on a hook and in the ice chest.

Of course, live shrimp isn’t the only bait that works on tripletail. I’ve seen them hit live and hook on menhaden (pogies), live finger mullet and live croakers.

I remember one trip several years back with Barry Bracknell, the state record-holder with a 37-pound, 5-ounce fish. We found a log lodged on the edge of the channel. On the deep-water side of the log, there were more blackfish congregated than I’d ever seen before or since. There were three tripletails biding their time in the shade. We took pogey chunk bait and tossed it near the log. Without hesitation, the nearest fish inhaled the bait. We ended up catching all three, which is a phenomenal day for tripletail fishing.

Of course, don’t pass up a crab trap line when you’re cruising around. A small crab trap float can be all that’s needed to hold a big tripletail.

Because tripletails vary in size, it’s best to choose rugged fishing tackle when trying to catch these. While some old-timers still use what are called Calcutta poles, large cane stalks rigged with heavy line, most anglers use medium-heavy rods and relatively heavy line.

The reason for the heavy line is to be able to horse the fish away from the structure. Some people are using 20-pound test line while others prefer 30-pound test. One key to catching these is the hookset. Don’t be shy. If you don’t drive that hook into their bony jaws, the fish will swim away and won’t bite again until at least the next day.

The daily bag limit in Alabama waters is three fish with an 18-inch minimum total length.

That daily bag is optimistic. A good day of blackfishing is putting one fish in the ice chest. Anything more is a great day. Fortunately, along the Alabama Gulf Coast, anglers have had many great days of fishing for tripletails.