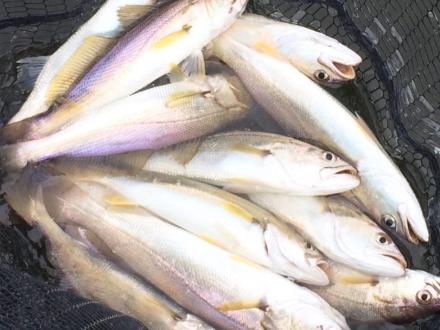 Got a fish fry coming up?

Well, September is a great month to find one of the easiest-to-catch species that is perfect for that fish fry. That species is white trout, also called sand or silver seatrout.

The many inshore reefs and oyster beds along the Alabama Gulf Coast hold plenty of white trout this time of year, and it doesn't take great angling skills to fill an ice chest with this fish. White trout are smaller than their speckled trout cousins, and white trout sport silver sides without any specks. A white trout that weighs a pound is considered a good catch. The state record is 6 pounds and 11 ounces, but that fish was caught offshore, where the big boys live.

To catch white trout, just head to any area with a hard substrate where the fish can hang out and ambush shrimp, small baitfish or a variety of marine invertebrates. Spinning tackle with 10-pound test line is usually perfect for the job, although you may occasionally have an unfortunate encounter with a sharp barnacle. But don't worry, just retie and start catching fish again.

White trout seldom move up the water column and will be found on or near the bottom. Toss a quarter-ounce jighead with a soft plastic grub in a lighter color onto the reef or oyster beds and give it plenty of action as you slowly retrieve the jig across the reef. An occasional hop is sometimes needed to trigger a strike.

White trout tend to hit a falling bait at times. When one is hooked, take your time because their mouths are easily ripped. Then flop the fish in the boat and cast back out in the same area. Usually, where there's one white trout, there are dozens.

The key to a fish fry with white trout is the way the fish are taken care of after they're caught. The flesh of a white trout is not as firm as a speckled trout. Therefore, it's important to get white trout cooled down as quickly as possible.

The best solution is to have an ice-water slush in your ice chest in the boat. Take the fish off the hook and toss it into the slush so the whole fish is submerged. If you get to the point where the fish is not submerged in the slush, then you've caught plenty for the fish fry and it's time to head to the cleaning table.

When you're ready to clean the fish, prepare another cooler filled with a fresh batch of icy slush. When the filet comes off the fish, toss it into the slush to keep it as cold as possible until it's time to batter the fish. Then toss it into a cast iron cooker with 350-degree oil. A little salt and seasoned fish fry mix is all you need to fry a basket of fish and make the waiting crowd happy and full.