Water Temp Getting Just Right to Reel In the White Trout

The trout fishing is on fire along the Alabama Gulf Coast. The speckled trout (spotted seatrout if you’re a purist) gets the most attention, but the speck’s cousin can be loads of fun to catch and can provide all the fish needed for that Memorial Day fish fry. 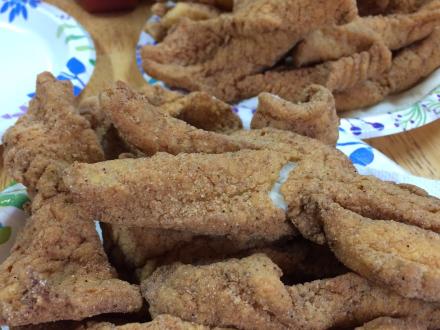 You can catch enough white trout for that Memorial Day fish fry.

The white trout, or sand trout, doesn’t get as big as their speckled cousins, but they are voracious feeders once the water temperature gets right. The magic number on that temperature gauge seems to be about 80 degrees. When the water gets that warm, which it has done a little earlier than normal this year, the white trout invade the inshore reefs and oyster beds. The white trout feed on shrimp and invertebrates that associate with the hard bottom.

A nice white trout weighs about a pound, but two-plus-pounders are caught on occasion in the inshore waters. You have to hit the offshore rigs to catch bigger white trout.

Seldom are you going to find white trout any place other than along the bottom. Use a quarter-ounce jighead with a soft plastic grub in a white, silver or chartreuse and hit the oyster beds and reefs. White trout tend to hit the bait on the fall, so cast out and give it quick little hops to trigger the strike. That’s when the fish aren’t in a feeding frenzy. When the white trout are really biting, anything moving in the water will work. My buddy experimented the other day on exactly what minimum lure would evoke a strike. After his plastic grub was obliterated by the trout, he just tossed the bare jighead out and continued to catch fish. Once you find the fish, you can usually put 20 or more in the boat before they slack off. Sometimes a lot more.

White trout do have tender mouths so I use 10-pound test line on medium-action spinning tackle. I also back off on the drag just a bit to keep from ripping the hook out of their mouths.

There is no length or bag limit on white trout in Alabama, but I don’t keep anything that wouldn’t make a decent filet. Because the flesh of the white trout is not as firm as a speckled trout, special handling is required to get the freshest flavor possible.

Instead of just throwing the trout in a cooler with a bag of ice, pour the ice in the cooler and add water to make an ice-water bath for the fish. Cooling the fish down is the key to keep the filet firm and easy to prepare. If you’ve caught so many that the fish can’t be submerged in the icy bath, you’ve got more than enough for the fish fry.

I carry that special care over to the cleaning table, too. I have a container with ice water. When I slice off a filet, it goes into the icy slush. When it’s time to cook, I drain the water off the fish. I then submerge the fish in milk for a few minutes before rolling in my favorite fish fry mix. After a good coating of the mix, the filets are dropped in 350-degree oil. When the fish rise to the surface, it’s time to dip them out and move to the next batch. I use paper sacks with paper towels on the bottom to hold the fish and soak up the extra oil. Before long, you’ll have plenty of fish to feed the hungriest of guests.