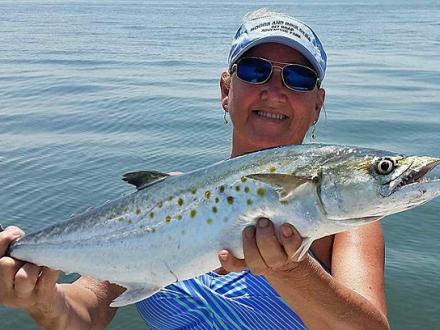 With many anglers headed offshore to enjoy the extended red snapper season, quite a few fish are being bypassed on the way out, including the abundant Spanish mackerel.

What’s so great about Spanish this time of year is you don’t have to get out of sight of the beach to enjoy the fishing, and sometimes the fishing occurs very near the beach.

Slow-trolling for Spanish mackerel and small king mackerel just off the beach is very productive during the summer months on the Gulf Coast.

While there are several charter boats offering trolling trips for a nominal fee, it doesn’t take a large boat to enjoy the Spanish bite. Any saltwater boat that is seaworthy can be used for trolling. Numerous rod holders are a plus in your quest to get many baits in front of the fish. Forget bringing your bass boat down, because it’s too easy for a trailing wave to wash over the transom and cause problems.

Trolling at seven to 10 knots outside the second sand bar to about a mile offshore will likely result in numerous hook-ups. Halco and Clark spoons work well on the mackerel when deployed at different depths behind the boat. I like to have a couple of spoons near the surface and several down in the six-foot range. You’ll probably need to pick up some planers at the local sporting goods store to make sure the spoons stay at the desired depth.

Some mackerel fishermen use a different tactic called bump and drift, which can be highly productive at times. They bump the throttle to get the lures moving behind the boat and then kick the motor into neutral to let the baits slowly drift toward the bottom.

Also, be on the lookout for birds diving along the beach. It could be a school of Spanish dining on baitfish as the birds pick off the missed morsels. Keep a rod or two ready for casting spoons or lures into the middle of the feeding frenzy.

Spanish and king mackerel have mouths full of sharp teeth, so you’ll need heavy monofilament, 30-pound, or small-diameter steel leaders, either solid or Sevenstrand. Don’t use gold swivels when fishing for mackerel. The fish might mistake the flash for a small baitfish, and you’ll loose your whole rig if they hit it. Use high-quality, black swivels to ensure your fishing line doesn’t get twisted.

If you’re not having much luck with the artificial lures, you may need to change to natural bait, either fresh or frozen. If you can get them, hardtails (blue runners), finger mullet or menhaden fit the bill for live bait. If you can’t get live bait, head to the store and get fresh frozen cigar minnows or ribbonfish (silver eels). The Gulf Shores-Orange Beach area has numerous tackle/bait shops that will have the frozen bait and terminal tackle needed for mackerel fishing.

Anglers who don’t regularly catch mackerel can sometimes be mistaken about the species that was just hauled into the boat. A small king mackerel and a mature Spanish mackerel look very similar. The easiest way to tell is to raise the dorsal (top) fin. If it is dark, almost black, near the long spine, it’s a Spanish. It’s a king if the dorsal fin is solid gray.

The king mackerel daily limit has been increased this year to three per person with a 24-inch fork length minimum. The daily creel limit on Spanish mackerel is 15 per person with no size limit.

It’s best to prepare Spanish fresh, and several restaurants provide “cook your catch”service. They will cook them for you in a variety of delicious ways.