Anticipating the Arrival of White Marlin

“Any day now.” That seems to be the common answer from those in the know like Blake Michaleski at J & M Tackle as to when the much-anticipated white marlin bite will happen.

I have written before that this is the best time of the year to check ‘catching a marlin’ off your fishing bucket list.

Every season is different, but usually, from as early as the beginning of August until as late as November, white marlin make an appearance just thirty-miles or even closer from Perdido Pass. Each year, anglers are given a chance to catch a billfish without having to make runs of eighty-plus miles to the deep water oil rigs.

When the ‘whiteys’ do show up, they can be found at the usual offshore spots such as ‘The Nipple,’ ‘The 131 Hole’ and ‘The Elbow’ and all points in between. If you aren’t familiar with these fishing hot spots, they are all listed on offshore maps. As you approach ‘The Nipple’ which sits atop the 100-fathom curve keep an eye on your GPS and you will see the water depth begin to drop quickly from 200-feet to 600 feet. That’s where you want to be!

I like to put out the lines as I approach 300-feet of water, but I have caught marlin as shallow as 250 feet, or as soon as I start to see concentrated bait, usually in the form of flying fish. Be on the lookout for a water color change from green to either ‘clean green’ (you will notice the difference) ‘blended blue’ or when it all lines up perfectly, beautiful cobalt blue water.

For the past couple of weeks, the water has not been what most of us would call ‘pretty’ at the close-in marlin trolling grounds. It’s been ranging from dirty green to clean green, but the area has been loaded with bait, which is a critical component when searching for billfish. Last Thursday, my friend Frank Lott was fishing out there on the local boat 2 x 4. “The water wasn’t all that pretty, but there were more boats than I have seen out there in recent years. Once we located the bait that’s when our action started,” said Lott.

Frank and his crew didn’t catch any white marlin, but they did catch two sailfish and missed a third. All three bites came within an hour and fifteen minutes which is a typical pattern once you find the fish. The action can be almost non-stop. They also caught two yellowfin tuna on the day trip, which started with a 4:30 AM departure from Orange Beach and they were back at the dock at 3:45 that afternoon. Not a bad day of big game fishing! Sailfish and white marlin travel in the same water conditions as well as potentially blue marlin, wahoo, tuna and dolphin. You never know what you will catch when pulling lures and ballyhoo targeting pelagic fish.

‘The Nipple’ is my absolute favorite place to fish in the Gulf of Mexico in our 26′ center console boat for so many reasons. The first is the short run. Once you clear the pass, you can be fishing in an hour or even less depending on how fast your boat runs. The other reason why I love being out there so much is it allows us ‘small boat guys’ the chance to catch species of big game fish that most of the year is only afforded to those with big sportfishing boats.

Some years we have a ‘decent’ white marlin bite and other years it is phenomenal. When we have a great year, the fish seem to just ‘show up overnight’. There will be reports of a few fish being caught each week and then someone will have an epic day when they catch five or even ten white marlin in one trip. Once that happens word will spread very quickly. I have counted as many as fifty boats fishing around ‘The Nipple’ and hopefully, that will be the case again “Any day now.” 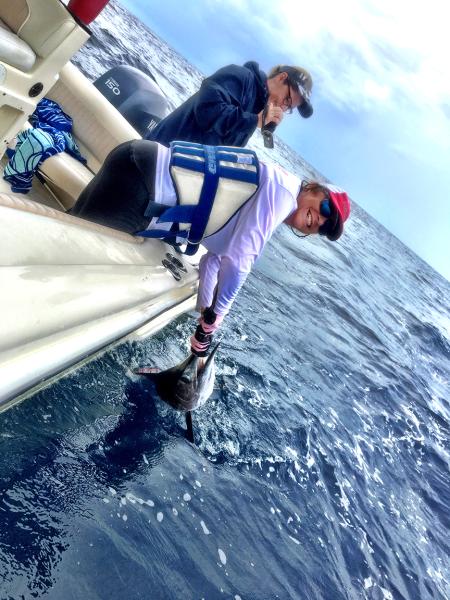