Alabama anglers who are casting in coastal waters are seeing red. But they’re not angry. It’s the fish that is plentiful in the state’s estuaries, coastal waters and nearshore waters. Anglers are catching red drum, better known as redfish, in significant numbers now that water temperatures are rising. 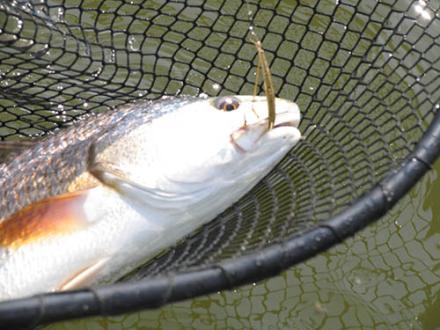 One aspect about red drum fishing for our many coastal visitors who are accustomed to freshwater fishing is techniques used to catch redfish are very similar to bass fishing.

Therefore, when you pack up the car to head to the beach for a little R&R, throw in a couple of rods that you use for bass fishing. Of course, you don’t want to bring you finesse fishing equipment. Bring the sturdy stuff, because a nice size redfish will test your equipment, and you’d better have that drag set correctly or you’ll be respooling your rig with new line. And I wouldn’t go with anything less than 14-pound-test monofilament. Redfish are strong and barnacles are sharp.

By late April, redfish can now be basically anywhere in Alabama’s coastal waters. Like bass, they do prefer to hang around some type of structure. Reds will school at time around balls of baitfish, but you’ll more than likely find them at some ambush point near a reef structure, oyster bed, rock jetty or piling.

For a time back in the 1980s and early 90s, the redfish population was hammered by commercial netting because of the blackened redfish craze. Fisheries managers realized the species was in big trouble and managed to ban the netting of redfish in federal waters. Since the net ban was implemented, the redfish have rebounded in great numbers, although there are limits on what anglers can take.

In Alabama, redfish are managed through a three-fish bag limit and a slot limit, which allows anglers to keep fish between 16 and 26 inches. One redfish larger than 26 inches is allowed per angler per day because of a possible state record fish. Bull reds, those redfish larger than 26 inches, are really not palatable. Take a nice photo and release the fish to fight another day.

Unlike other inshore game species, redfish are typically bottom feeders, which is evident because its mouth is positioned on the bottom of their snouts. That allows redfish to cruise the estuaries and bays, looking for small crabs, shrimp and baitfish. Of course, that doesn’t mean if you see a school of redfish crashing through bait on the surface you can’t catch them on a topwater lure.

Live-bait fishermen have plenty of luck with bull minnows, menhaden (pogies) and shrimp. Some anglers will take small crabs, break them in half and use that for bait.

For the most part, though, when I go looking for redfish, I ease around the edges of the bayous and bays, looking for likely spots. I like to tie on a spinnerbait specifically designed for redfish with a heavy wire frame. It has a single Colorado blade and a quarter-ounce jighead with a minnow-imitation body.

The spinnerbait allows me to cover lots of ground. Another technique is to tie on a gold spoon, most of the time a Johnson Silver Minnow. The spoon wobbles like an injured baitfish, and the redfish can’t resist nailing it. If you don’t have either a spinnerbait or spoon, just tie on a quarter-ounce jighead with a minnow imitation body. Take several colors to find which one the redfish like on that particular day.

When the day is done and you’ve got several slot redfish in the cooler, take a filet knife and cut each filet off without removing the skin and scales. Take you favorite seasoning, usually Cavender’s Greek for us, sprinkle generously on the meat side and drizzle with extra virgin olive oil. Place filets scale side down on hot grill and cook until meat flakes with a fork. The skin and scales will form a bowl and you can serve it just like that.