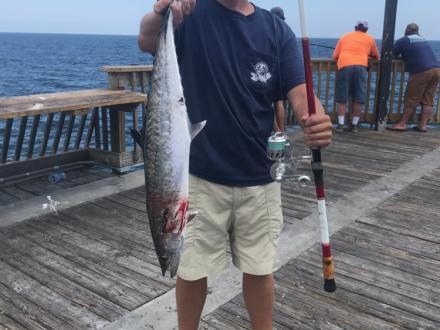 The Alabama Gulf Coast fishing and tourist season reaches a crescendo in early July with Independence Day celebrations and some of the best opportunities to catch fish at one of the longest pier on the Gulf of Mexico, the 1,540-foot Gulf State Park Pier.

Michael Sawyer at J&M Tackle in Orange Beach said the dirty water that plagued the pier for a little while is long gone, and the fishing is fantastic.

Sawyer said plenty of Spanish mackerel, ladyfish and bluefish are being caught by the pier anglers, who have 2,448 feet of fishing space on the pier. If you’re not familiar with saltwater fish, the general rule is to keep your fingers away from their mouths. Most have sharp teeth, especially the Spanish and bluefish. Whatever you do don’t get close to a bluefish’s mouth. I was going to show a new angler the sharp teeth and lost a small piece of a fingertip when the very alive bluefish snapped onto my finger. Lesson learned. You’re on your own if you want to see bluefish chompers.

A few tarpon have also been rolling past the pier with several hooked. However, the tarpon have a way of coming unhooked or breaking the line before the anglers can get the fish in.

The king mackerel fishing is picking up on the octagon at the end of the pier, where the action gets particularly frenetic when a school of kings or Spanish swim by. The pier regulars have developed a system that allows an angler who is hooked up to maneuver around the pier with the help of the other anglers. It’s sometimes affectionately called the Gulf Shores Pier Shuffle.

If you’re not familiar with the action on the end of the pier, it’s best to be a spectator first and see how the anglers work together to land a fish. Then ask for help from those regulars, who will offer tips on how to join in the fun. You will also find out what kind of tackle you need to catch the bigger fish.

Back toward the beach where your typical bass tackle works well, speckled trout are being caught in the shallower water. Watch for schools of baitfish. The trout will be hanging off the edges, looking for an opportunity to ambush an alewive, pinfish or sardine. The anglers who have had the most luck are fishing for trout with live shrimp and small alewives caught on a Sabiki rig or bait ribbon. Check with the local bait and tackle stores for the best bait-catching tackle before you head to the pier. Oh, and while you’re trout fishing for live bait, make sure your drag is set properly because a redfish may swim into the area and slam your bait.

Those who target pompano in the shallow water are using the traditional double-hook rigs with bits of fresh-dead shrimp and a sliver of Fish Bites, an attractant sold at the bait stores. While you’re pompano fishing, you might hook into whiting, a small fish that runs the beaches. Although whiting don’t get very big, there’s nothing better than a platter of fried whiting filets.

Gotcha plugs, Looney jigs and bubble rigs are working well on the Spanish, while the king mackerel are mostly hitting live bait, alewives and hardtails. The tarpon are hitting live alewives and large swimbaits. A few flounder are being caught around the pilings on bull minnows.

As pier regular David Thornton says, it pays to be flexible in your fishing goals. One day may be better for Spanish, one day for speckled trout or king mackerel. He recommends being prepared and having a change of tackle available as close as your vehicle. He sometimes catches a limit of one species and moves on to another. If it gets too crowded on the octagon, he’ll move closer to the beach to target pompano.

That’s what’s so great about Gulf State Park Pier. The possibilities are almost endless. Drop by your local tackle store and then head on the pier for a great day of fishing.