The Right Bait for Red Snapper 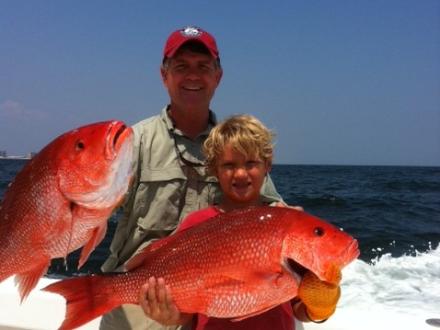 It seems we all have gotten a little spoiled with the size of red snapper we catch these days. The fish are just bigger than they have ever been in the Gulf. I can’t even remember the last time I had to measure a snapper to see if it was legal. Today eight-, 10- and 12-pound snappers are commonly caught. I think sometimes we all forget that a 10-pound snapper is a really nice fish!

Snapper of all sizes, including huge 20 or even 30-pound fish are commonly caught on dead bait. Squid, pogies, and cigar minnows are always reliable and readily available. But if you want to try to target huge snapper, you need live bait and the bigger, the better. Captain Casey Price on the charter boat Lady D always has a supply of live baits on board. “Big snapper will hit a dead bait, but to consistently target trophy fish, big live baits are your best option.” Pinfish and ruby red lips are two of Price’s and snappers favorites.

On those days when live bait is hard to come by, Price says large chunks of meat also work well. “We use a lot of big bonito strips. But you have to make them big enough so the smaller fish cannot get it in their mouths. That limits the frustrating peck, peck, peck from the little reef fish.” Price also keeps belly meat from other fish they have caught to use during snapper season. “When we catch amberjack and tuna, we use the belly meat, which is usually discarded to make big snapper baits.” Price says his crew cleans the fish and throws the leftovers in the freezer to use at a later date.

As important as big baits are, Captain Price says equally important is to go small on the lead weights. “Something that is overlooked is the importance to downsize your tackle. Use the smallest weight possible to get your bait down on the spot. Usually the larger fish are up on top of the reef, so you don’t want to bomb your bait past them with a big eight or ten ounce egg weight.” Price says to use just enough weight to get your bait down through the current. One, two, or three ounce weights will slowly get the bait into the feeding zone higher in the water column where the biggest fish aggregate. In this set-up, he prefers the ‘knocker rig.’ A knocker rig is where the weight slides all the way down to the hook as opposed to being tied on the main line above the swivel.

Price also likes to use a no weight rig to create a drift line behind the boat for big snapper. Pitch baits are cast out away from the boat without a weight and are left to drift in the current. Many times large snapper will hang just beyond the reef as well as other fish like king mackerel. After tossing the bait out, put the rod in the rod holder with light drag and have someone keep an eye on it.

We all know the window to catch these fish is small, but if you follow the advice of Captain Price your rewards and red snapper will be big.