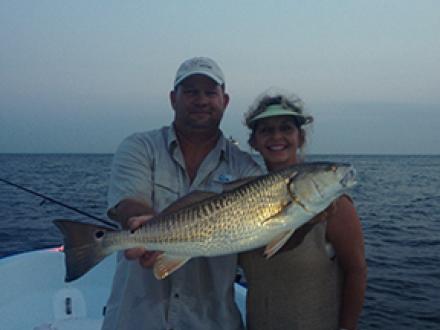 As summers go, the current one hasn’t been too oppressive, although I don’t expect to escape the dog days for the whole summer.

When it gets to the point that it’s really too hot to fish during the day, it’s time to break out the running lights on your boat and make sure they meet U.S. Coast Guard standards because it’s time to go night fishing.

That’s the great thing about the Alabama Gulf Coast. Whether you just want to beat the heat or you’re getting off too late at work, the opportunities to catch fish under the lights is excellent.

For the majority of people, fishing after sunset is the most common occurrence. But it works just as well for those early risers who prefer to head out in the cool of the early morning and revel in the magnificent colors of a sunrise.

Probably the key word in night fishing is stealth. Being quiet is essential, because the target fish species typically are not at the top of the food chain, and any disturbance will have them finning for cover.

The target areas are the bays, bayous, and islands with piers and boat houses with lights. The overhead lights attract insects, which attract small fish and crustaceans, which attract the target species of speckled trout (spotted seatrout) and redfish (red drum). Shrimp and glass minnows will be the most common bait species under the lights. Therefore, bait choice is important except during a feeding frenzy, which has happened on occasion, but not often.

Live shrimp and minnow imitation plastic jigs have worked best for me. Sometimes, it’s very important to downsize the lure to match the bait under the light.

Approach the light slowly and start fan-casting the light; never throw directly under the light with the first cast. I always start in the shadows and work my way through the light to the shadows on the other side.

More often than not, the larger fish are going to be hanging out in the shadows, waiting to ambush one of the glass minnows or shrimp that gets too close to the edge.

That leader can be important if you hook a nice redfish or big trout, which usually try to head for the barnacle encrusted pilings after the hook is set.

And that hookset can be important as well. I had a buddy relate a story recently about how he and a friend were fishing a light with live shrimp. His buddy was not familiar with the finesse required in some saltwater situations and couldn’t seem to hook a fish despite losing plenty of bait.

The fish were grabbing the live shrimp under the light and moving to the shadows before they swallowed the bait. The friend was setting the hook like a bass fisherman when he felt the first tick and was jerking it out of the fish’s mouth.

“I caught six or seven fish before I ever told him what was going on,” the successful fisherman laughed. “He was really getting frustrated by that time.”
Any pier with a light will do, but those near deeper water seem to produce better numbers and better fish. Be courteous around the piers and move to the next light if the owners or guests are using the pier.

Enjoy the cool of the night and the good fishing around the lights. Oh, did I mention the running lights?

Are you a Fin-Tastic angler? Submit a short essay telling us why you and your friends or family would make the best fishing reporters for Gulf Shores & Orange Beach Tourism. The winner will receive a three-night beach getaway. To learn more, go here.