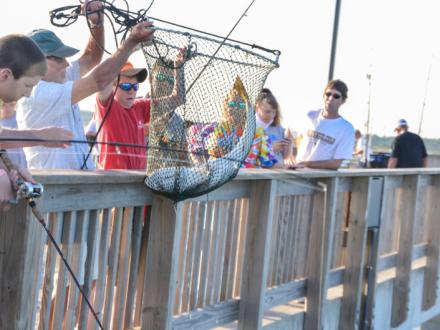 John Giannini of J&M Tackle in Orange Beach said the king and Spanish bites have been a little hit and miss lately but should become more consistent as the water temperature starts to cool. “The Spanish and king fishing are pretty consistent, but it's bound to get better,” Giannini said.

“The Spanish and kings are about to make their migratory run, headed back to south Florida, where they spend the winter. “The Spanish will hang around a little longer, as long as the water temperature stays at least 70 degrees.” Anglers on the pier targeting Spanish are using baby alewives, bubble rigs, Looney jigs, and Gotcha plugs. The king fishermen are using frozen cigar minnows and live alewives they've caught use live bait rigs.

Be aware as there are a few sharks hanging around the pier and will steal your catch if you're unlucky. When the mackerel vacate the area, the next phase of the fall transition will kick in with a significant improvement in fishing for several inshore species. “Fishing for whiting, redfish, and flounder is starting to pick up a little right now,” Giannini said. “And you should be able to catch pompano, too. It will get a lot, lot better when we start getting the consistently cooler weather.”

Whiting and pompano are being caught on pieces of fresh cut shrimp with a relatively small hook with light line now that the water has cleared. Grab some bull minnows from the bait shop if you want to target flounder and redfish, or you can take a cast net and catch finger mullet. Sand fleas, whether you buy them frozen at the bait shop or dig your own in the surf line, are great baits for redfish and pompano.

Again, Giannini said that most visiting anglers have the impression that you have to have big, heavy tackle to fish on Gulf State Park Pier. Although some fishermen use long rods on the end of the pier for casting distance, the majority of anglers shouldn't try to master the heavy stuff on just occasional trips to the pier, according to Giannini. He suggests using tackle suitable for bass fishing on the pier because it is much easier to use and will often catch just as many fish.

He said any baitcasting or spinning reel capable of holding at least 150 yards of 12-pound-test line is suitable to catch the majority of the fish available at the pier. Giannini also said the great thing about the new pier, which re-opened in 2009 after being destroyed by Hurricane Ivan, is the spacious area for fishing.

“There's plenty of room to fish,” he said. “Most of the fish like Spanish and the smaller species will be caught from about 100 feet past the first octagon on the pier back to the surf.” Fishing and pier licenses are required on Gulf State Park Pier. Visit http://www.alapark.com/GulfState/ for more information.