Kings are Biting in Orange Beach 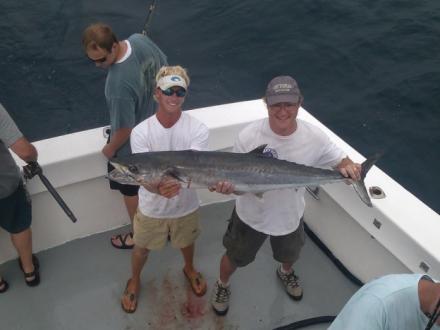 During the month of October, there is always a lot of chatter in local tackle shops, marina docks and Internet fishing forums about king mackerel. Kings are one of the most popular gamefish along the Gulf Coast for a multitude of reasons.

Their blazing runs immediately after a hook up bring a smile to every anglers face. They can be caught using different tactics, and especially if prepared fresh, they are quite tasty. At this time of the year, they are also in close to the beach. The king bite has been steady since about the middle of June offshore, but in the past week or so, the near-shore bite has picked up. "We caught nine kings trolling eight miles from the beach last week, and we caught them all within an hour," said Captain Joe Nash of Cool Change Charters.

When the kings start to get thick in close, trolling can bring some welcomed chaos to any trip. Nash usually pulls a spread of five lines consisting of the usual king mackerel baits. Number two planers with spoons and sea witches with either a cigar minnow or a bonito strip attached. "It's not uncommon to have multiple hook-ups when the fish move in close," said Nash. "Having two or three fish on at one time makes for some ‘reel' excitement in the cockpit for our customers."

Nash has also been catching kings while bottom fishing for beeliners. "We always have a drift line out behind the boat when bottom fishing, and usually that is where we catch our bigger kings." A drift line is tossed out behind the boat with little or no weight. A cigar minnow or a live bait is a preferred meal for a king mackerel or the drift line. Usually, the rod is left in the rod holder only to be picked up after the reel starts screaming. Customers on Cool Change get rewarded with an exciting fight on the light tackle Nash prefers for his drift lines. "We use 25-pound test and a long light rod, which makes for a great fight for our anglers.

” As far as enjoying king mackerel at your dinner table, like every other fish, fresh is better. Nash prefers it either grilled or fried. No matter how you plan on cooking your king mackerel, make sure the bloodline or the 'red meat' is removed from your fillet. Nash also recommends smaller chunks for frying, while using bigger pieces on the grill. When frying Nash likes to use a batter of beer, eggs, mustard and a flavored fishing coating. Prior to grilling the fish, Nash likes to marinade the fish in Italian dressing for about 30 minutes for added flavor.

We have been fortunate to have some slick calm days already this fall, and there is an abundance of bait close to the beach. Let's hope the bait stays close, and the weather holds, because we could all use a little more chaos before the fishing season comes to a close.