This weekend thousands of people will descend on the state line for the ‘Gulf Coast’s Greatest Beach Party.’ Moms, dads, sons, and daughters will each reach into a bucket of ice water, grab a dead fish, and throw it from Florida into Alabama at the annual Mullet Toss at the Flora-Bama.

The Flora-Bama website describes mullet as “one of the more popular and plentiful fish indigenous to this area. It is the only fish with a gizzard and is said to possess mystical properties. It is known as bait fish on the East Coast and a local delicacy here.”

I don’t know much about fish gizzards or mystical properties, but I do know that the East Coast isn’t the only place where mullet are used for bait. “Mullet are one of the most versatile baits we have available to us down here on the coast,” said Blake Michaleski of J & M Tackle.

Just as the Mullet Toss draws in participants from small children to adults that act like big kids, a mullet offshore will attract all sized game fish. Marlin, tuna, and mahi-mahi are routinely caught on mullet. Many large sport fishing boats in our area have perfected using a teaser dredge full of dead mullet to attract pelagic fish into their spread. This video shows how lifelike a properly rigged dredge of dead mullet can look and how enticing it is to marlin and tunas. However, a dead mullet is not just for teasing up the fish; it certainly will catch them as well.

Mullet can be rigged with a chin weight to swim in your spread, and some like to debone them to aid in the swimming presentation. You can also pull them behind an Ilander lure or a duster just as you would a ballyhoo.

As effective as a dead mullet is, a live one is tough to beat. “A live mullet under a kite around the deep water rigs is nearly impossible for tuna to resist,” said Michaleski. “The charter boats that are out there everyday use a lot of live mullet to catch those big tunas.” The kite keeps the bait just under the surface, and that leads to explosive bites from tuna charging up from the depths.

Mullet come in all sizes. Although the bigger the bait, the bigger the fish theory does indeed prove true many times, there does seem to be a preferred size mullet for tuna. A mullet about the size of a candy bar, six or seven inches, is often called tuna candy because they are so tempting to tuna.

In my last blog, I discussed using your cast net to load up with live bait before heading offshore. The same is true for catching bigger mullet. Docks in canals hold larger mullet, and there always seem to be lots of mullet around the piers of Orange Beach Marina. As the weather and water warm up, they will also be found more consistently in shallow water.

If you’re not headed offshore but still want to try to find big fish, a mullet can be your friend within sight of the coastline. A live mullet under a balloon just off the beach is one of the best baits you can deploy to try to land one of the ever elusive tarpon that migrate through our waters. Cut out a belly strip of a dead mullet, and put it on a jig. You have some prime bull redfish bait to use at Dixey Bar off Fort Morgan. Then, save the carcasses of the mullet, and load up your crab trap at the end of the day.

Like so many others, I love to toss a mullet every April, but all other weekends I prefer mullet on my fishing line as opposed to the state line. 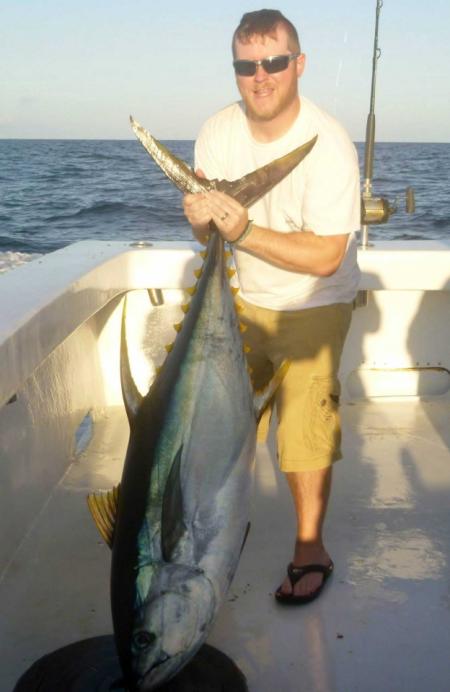 Tuna like these are often caught on live mullet at deep water rigs offshore. Photo courtesy of Intimidator Sportfishing
Find Your Perfect Place to Stay
Places to Stay Search Lodging Options
Where Your Journey Begins
Order a Free Vacation Guide Order a Free Vacation Guide
News from the Coast
Subscribe to Our E-Newsletter Subscribe to Our Enewsletter 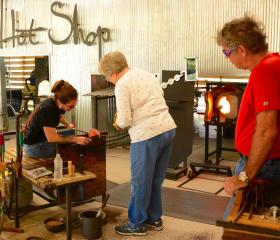 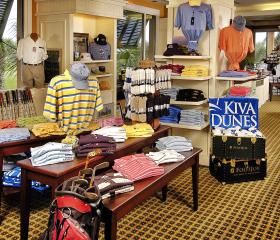 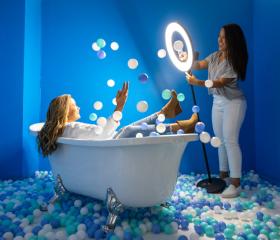 8 Things to Do in January in Gulf Shores & Orange Beach 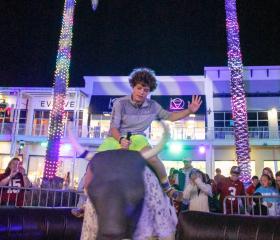 Things to Do for New Year's in Gulf Shores & Orange Beach 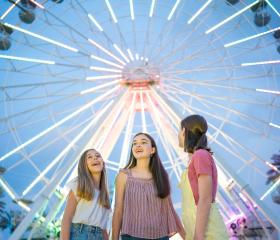