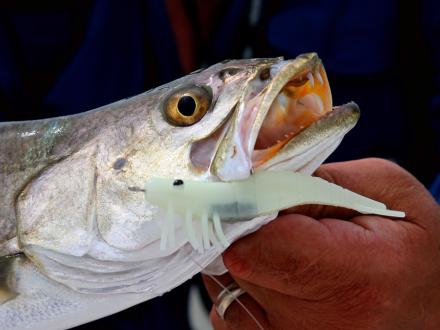 Blame it on El Nino. Fishing conditions right now have been significantly hampered by the weather pattern lately. Normally, this time of year, anglers could expect the start of the speckled trout season. However, strong winds over the past days have roiled the waters along the Alabama Gulf Coast.

“The fish are all going to be shallow right now. The trout are moving out of the deep water after the winter and are looking for some salinity, ” Gunn said.

According to Gunn, once the wind subsides it’s going to take about a week for the high, muddy water to clear out of the coastal waters affected by Mobile Bay.

There is good news for those who fish farther to the east, especially for speckled trout and redfish.

“Perdido Bay and the area around Ono Island will likely be the saving grace in terms of inshore fishing opportunities,” Gunn said. “The inshore artificial reefs in Perdido Bay normally produce this time of year. Perdido won’t get as muddy as other areas because its tributaries are sandier and won’t produce as much silt. Sometimes the saltwater just gets trapped up in Old River.” History claims Old River is just the old run of the Perdido River.”

Live shrimp are going to be hard to come by with all this fresh water right now. For bait this time of year you’ll want to try plastic grubs on lead-head jigs, Mirro-Dine lures or DOA shrimp under Cajun Thunder corks.

“I don’t catch a lot of big trout this time of year,” he said. “I catch them up to about 18 inches until the water warms up. On the other hand, if anything is biting, take advantage of it. Don’t pass up catching a nice stringer of sheepshead around the protected jetties. Grab any kind of natural bait and drop it down by the rocks and pilings. When the conditions are like this, it may be the only game in town.”