The Complete Guide to the Hugh S. Branyon Backcountry Trail

Only minutes from the beautiful Alabama Gulf Coast beaches is a trail system that seems far removed from the rest of the world and the bustling beach scene of Gulf Shores and Orange Beach: The Hugh S. Branyon Backcountry Trail.

The Backcountry Trail, or BCT, gives visitors a chance to leave the world behind and meander down lanes lined with towering pines, scrub oak, palmetto, and thick, green deer moss. You'll ride past shimmering freshwater lakes, coastal swamps and wetlands where cattails sway in the breeze. You'll be surprised and amazed to spot white tail deer, bobcat, coyote, wild boar, otters, and yes, even alligators, as well as one of a hundred different species of birds including osprey, bald eagles, and heron. Yet it's all very close to the beach destinations of the Alabama Gulf Coast. 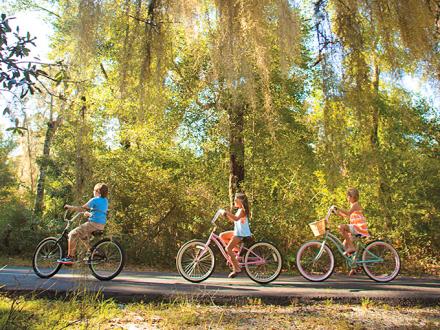 The trails of the BCT wind through six distinct ecosystems including longleaf sand ridges, coastal dunes, live oak maritime forest, pine flatwoods, freshwater marshes, and coastal hardwood swamps. What this means is that there is an enormous diversity of flora and fauna to be seen. Beautiful white-topped pitcher plants with their long, conical stem will be seen near the marshes waiting for their next meal, usually an unsuspecting fly. Florida rosemary bushes grace almost every trail. While not used for cooking the plant still has that familiar rosemary fragrance. Not sure what you're seeing? The trails have been outfitted with interpretive signs to help you identify plants and wildlife.

How it All Began

The area in which the Hugh S. Branyon Backcountry Trail lies was once inhabited by Native Americans thousands of years ago. Their early hunting paths later became logging roads for European settlers in the 1700s and centuries later some of those roads, including Catman Road, were “rediscovered” and converted into the trails of the BCT. In 2003 the first section of the trail was completed and was named for the former Gulf State Park Superintendent who had a burning passion for the outdoors, Hugh S. Branyon. Branyon served in his position from 1970 until his retirement in 2009.

From that simple beginning the trail began to grow outward and through the efforts of people like Orange Beach Coastal Resource Manager Philip West, the city of Gulf Shores, Gulf State Park, and the city of Orange Beach, the trail system has become a major Gulf Coast destination and now links both cities. In 2010 it was designated a National Recreational Trail and more recently was added to the list of Alabama Coastal Birding Trails. The “trail” itself is not a single path but more of a series of multi-use trails, more than 28-miles of them in fact that interconnect with one another as they wind their way through those ecosystems. Multi-use means just that—the paths are suitable for walkers and cyclists and is fully ADA accessible. No motorized vehicles are allowed.  A map of all the trails can be found online here 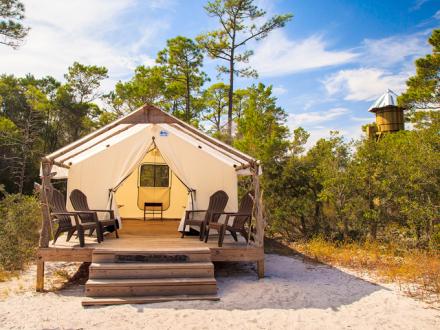 The Backcountry Trail has several trailheads, all of which have ample parking and direct access to the trail. Six restrooms and two water fountains are either located on the trail or not far from it. One of the highlights of the BCT can be found at the hub of the trail system where four trails meet. Here you'll find the Butterfly Garden, where butterfly-attracting plants shower the trail with color from spring to fall. The trail's nature pavilion is located here, and it is where you can watch those butterflies and birds from a porch swing, catch an informative show about local nature and environment, or bring along a picnic lunch to laze around on the thick, green lawn.

Next to the pavilion the kids will love to try their hand at a little rock climbing at the Bouldering Park, and just a short walk from the pavilion and just off of the Rosemary Dune Trail is a nice restroom with water fountains. It even has one for your dog.

You can either walk, bike, or skate the trail. Walking allows you to immerse yourself in the beauty that surrounds you, including coastal hardwood swamps along the Gulf Oak Ridge Trail or the waters of Little Lake on the Catman Road Trail. Biking the trail allows you to cover more ground and see more of the BCT in a shorter amount of time. Bring your own or you can rent one from one of the nearby outfitters like Infinity Bicycles or Beach Bike Rentals.

Remember, the paved trail works like a highway—whether walking or biking always keep to the right. If you would like to know more about the plants, wildlife, and history of the area, then reserve a seat on one of the Orange Beach Eco-Tours. The tours last about two hours and are led by knowledgeable staff from the city. Be sure to bring your binoculars, insect spray, snacks and drinks, and don't forget the camera.

There aren't many trails of this type where you can actually camp but you can on the Backcountry Trail. The trail now offers an amazing camping area located under the tall pines with white sand footing and scrub oak called the Outpost.

The Outpost has three primitive campsites, which you must walk or bike to. The sites are canvas tents erected on a slightly elevated rustic floor that was framed with recycled downed trees. Each site includes nylon cots and fire pits. Gulf State Park supplies the firewood. A nearby pump sink is available to wash up at. Even though you have to walk or bike in, you're close enough to the Gulf State Park Campground campstore in case you need anything. Remember, there are only three campsites and they book fast. Reserve yours in plenty of time for your trip.