A Part of the What's Biting Series 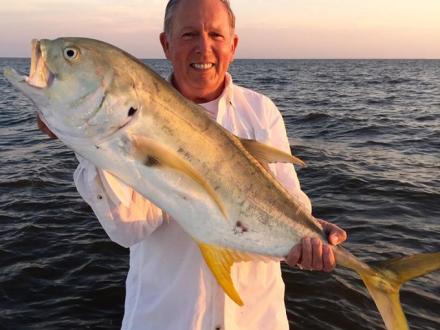 Some of you reading this might remember when triggerfish were considered ‘trash fish.’ Triggerfish were caught when targeting red snapper or some other tasty reef fish and then thrown back because they weren’t viewed as worthy of eating.

I don’t remember those days, but that certainly isn’t the case any longer. For me, triggerfish is one of the finest eating fish our Gulf has to offer. I am not sure how or when the mindset changed, but one local chef wants to make the same thing happen for many species commonly caught on private and charter boats.

Chris Sherrill, Executive Chef and Managing Partner of the Flora-Bama Yacht Club, is part of the NUISANCE Group which is making big strides in utilizing commonly caught fish which have forever been considered not worth keeping for the table.

It’s not uncommon for Sherrill to make a post on Facebook asking for captains to bring him fish that would not normally be on a restaurant menu, such as jack crevalle. I must admit I was a little more than skeptical, but during the years at the Flora-Bama Fishing Rodeo and at the Yacht Club I have been pleasantly surprised with what Sherrill has been able to do with a fish I would have never considered eating.

“That is pretty much everyone’s reaction,” Sherrill said of my culinary conversion. “We have amazing chefs on the Gulf Coast that are very innovative when it comes to preparing a dish featuring non-traditional fresh fish from the Gulf.”

Sherrill has featured many of these fish on his menu with the Gulf Fresh Catch of the Day selection.

“Customers will call us to find out what fish we are preparing because they are excited to try something new and unexpected,” Sherrill said. The Flora-Bama Yacht Club also encourages customers to bring in their own fish with a You Hook ‘em We’ll Cook ‘emoption. Suddenly a day of only catching a few non-targeted fish turns into you having a Gulf Coast chef prepare a wonderful meal from virtually any fish caught in the Gulf.

But Sherrill’s goal is not just about putting unique fish on your plate. It’s much bigger than that. Sherrill realizes how big an impact the fishing community has on our local economy and he has a desire to serve the freshest fish to his customers. He wants to grow the value of other fish that can be targeted on charter trips as well as private boats.

“If we can educate consumers about other species of fish in the Gulf we know that will lead to more sustainable fishing,” he said. “Utilizing resources of fish stocks that have been overlooked for decades will create more options for fishermen to target while maybe even alleviating pressure on some of today’s most popular fish.”

If you want to give this a try yourself, next time you catch a gafftopsail catfish, a hardtail or even a stingray, put it in the cooler and head on over the Flora-Bama Yacht Club and enjoy the treasure Chef Sherrill creates for you.