The weather this year has been definitely of the yo-yo variety, and the record warm spell we enjoyed in February set in motion a migration that usually occurs a little later in the year.

Water temperatures along the Alabama coast reached into the lower 70s this week after the spring weather pattern returned to normal.

It might be a little while before the larger king mackerel arrive near the shore, but techniques for catching kings will also catch their close cousin, the Spanish mackerel.

Trolling a variety of spoons often will catch either species of mackerel, usually the smaller kings or any size Spanish. To tell the difference between a small king mackerel and a Spanish is relatively easy. Just lift the dorsal fin up. If it’s mostly opaque, it’s a king. If it’s mostly black, it’s a Spanish.

If you catch a bonita (bonito or little tunny) while you’re trolling, take that fish and slice a piece of belly meat to add to your spoons for added enticement for the mackerel.

Be sure to deploy the spoons in a staggered pattern behind the boat to prevent tangling, especially when the boat makes a turn. When headed away from the beach into deeper water, add planers to the rigs to get the bait down in the water column.

Any tackle shop in the Gulf Shores-Orange Beach area have plenty of options and advise for the correct planers and spoons, as well as terminal tackle like leaders and leader material. Fishing for king mackerel always requires a wire leader because of their sharp teeth.

Trolling speed should vary between 7 and 11 knots, depending on the sea conditions and what speed seems to be producing most of the bite that day.

If you’re after bigger fish, head out to the numerous petroleum rigs farther offshore and troll cigar minnows with dusters or silver eels (ribbonfish). Depending on the conditions, you might be able to find a live bait or two, which is even better.

When you’re using live bait, a drift technique is often successful. Drift with the wind and bump the motor in and out of gear. The bait will rise when the propeller is turning. When the motor is in neutral, the bait will slowly sink, which can often trigger a bite when the fish are a little finicky.

Make sure you have your drag set correctly if you’re after the bigger kings, because there’s a reason they have the nickname of smokers. They can smoke the drag system on your reel if it’s not set at the correct tension. Be sure to have plenty of line to let the fish make several runs to tire it out before trying to bring it alongside the boat. Kings off the Alabama coast can grow to 60 pounds, although most will be from 20 to 35 pounds.

The king mackerel fishery in the Gulf is in great shape, which prompted the National Marine Fisheries Service to increase the daily bag limit for recreational anglers last year from two to three fish per angler per day with a 24-inch fork length minimum.

Enjoy the unusual weather pattern this year and head out to hook a hard-fighting king at the first opportunity. And don’t forget, the end octagon at Gulf State Park Pier can be a hotspot for kings and Spanish. 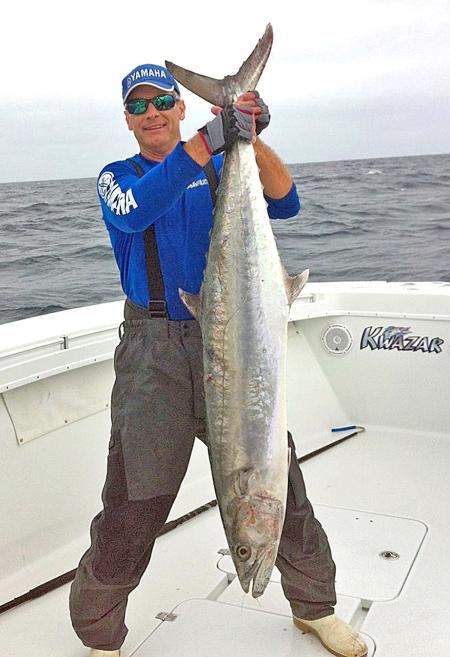