Mother Nature has thrown a curve at speckled trout anglers on the Alabama Gulf Coast this year. In normal years, trout fishing would be wide open all along Alabama’s 53-mile coastline, but unusual weather patterns this year have concentrated the fishing in the Orange Beach area. 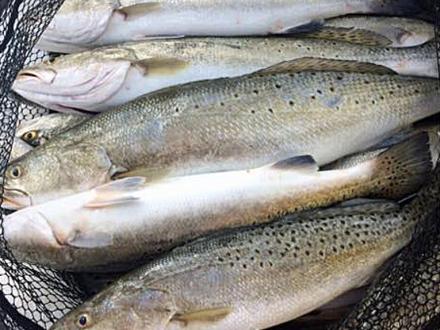 “The inshore reefs in Orange Beach appear to have the best fishing right now,” said inshore guide Jay Gunn (251-752-8040). “People who are fishing everywhere else are looking forward to when the wind quits blowing.”

High river levels moved the trout that would normally be around Bon Secour and other areas near Fort Morgan. The better water conditions with higher salinity and improved water clarity around Orange Beach have improved the success of the trout fishermen in that area.

Early this year, a February warm-up pushed water temperatures into the upper 60s far earlier than normal. However, a cooler weather pattern then developed over the area, and the water temps barely fluctuated.

“The water temperature has been between 68 and 71 degrees since the middle of February,” Gunn said. “It’s actually a good bit cooler right now than it should be. Normally, it would be in the 75- to 76-degree range and the trout would be moving up on the flats to feed. These cool nights are the culprits.”

But good news is ahead. The weather forecast for the first week of May has the daytime temperatures in the 80s and nighttime temps in the 60s, which are in the normal range.

“When it gets warmer, we’ll be back on track,” Gunn said. “When the weather warms up this week, the trout should move to all the inshore reefs, oyster beds and other usual trout hangouts. You’re probably going to have to hunt for them a day or two because nobody has been able to keep track of the fish because of the wind.”

The great thing about spring trout fishing is the fish are not finicky at all about what they’ll hit. They’ll hit plastic grubs, MirrOlures and other hard baits and shrimp imitation baits under a popping cork.

“Normally the trout are very cooperative around the first of May,” Gunn said. “You can go to just about any of the inshore reefs with grubs or a DOA shrimp under a popping cork and catch a limit of school trout. That’s just normal this time of year. We’re just a little behind this year.”

While you’re waiting for the trout bite to turn on, Gunn recommends taking live bait and fishing the grass beds and stumps along the shoreline for redfish.

“We put six nice redfish and a couple of flounder in the boat doing that just the other day,” he said.

Subscribe to Coastal Catch, a quarterly newsletter for news and information about all things fishing on the Alabama Gulf Coast.