Now is the Time to Book a Fall Tuna Trip

With the prospects of some of our fall activities being limited this year, a great option is available in the beautiful waters of the Gulf of Mexico. 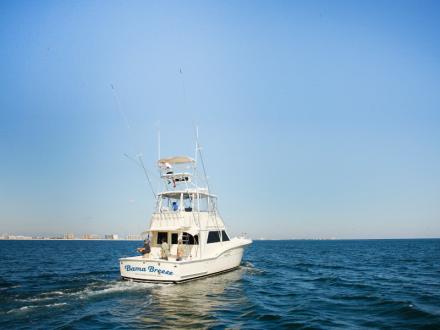 I’m talking about an offshore fishing adventure to catch yellowfin tuna, one of the most preferred species for diners everywhere.

Tuna are a pelagic species that are always swimming, looking for its next meal, which can be any bait species from squid to sardines. In the Gulf, the two most common tuna species are yellowfin and blackfin. A giant bluefin will occasionally be boated, but it’s extremely rare.

In terms of size, blackfins usually run from six to 10 pounds, but you might get lucky and catch a 20-pounder, which will put up quite a fight.

The more desirable yellowfin gets much bigger, averaging about 50 pounds but sometimes as big as 200 pounds. Yellowfins are the muscle cars of the Gulf – built for speed and capable of catching the aerodynamic flying fish.

While a few private boats will head far out into the Gulf to search for tuna, most anglers prefer the comfort of a charter boat for the significant journey that could end up more than 80 miles for the Alabama shore. Because of the travel, you need to book an overnight trip on one of the many charter boats in Orange Beach and Gulf Shores. Round up all your friends to share the cost for a possible trip of a lifetime, not to mention a cooler full of sushi-grade tuna.

Most charter boats will head out of Perdido Pass with a course set for the deep-water petroleum rigs. Take advantage of the travel time to get rested up for what will likely be an epic battle with one of the hardest-fighting fish in the Gulf.

Most of the time, the captains will stop on the way and let the anglers catch hardtails (blue runners), cigar minnows and skipjack herring that will be used for live bait on the trip.

If you’re lucky enough to find clear green or blue water on the way to the rigs, especially when there’s a significant color change called a rip, the captain may decide to do a little trolling or drop down some live bait in deeper water to try to locate the yellowfins. 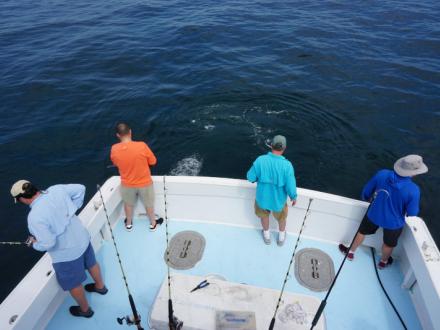 The crew may also deploy several kite rigs that will dangle live bait on the surface to see if a yellowfin will slam it on top.

While most yellowfins range from 30 to 60 pounds, occasionally a big fish will be hooked. A 100-plus-pounder will give you a workout that could leave you with arm muscles so tired it becomes difficult to make a fist. I can promise you’ll have to take a break to recover after battling a big yellowfin.

Waking up in the middle of the Gulf of Mexico as the sun starts to appear on the horizon is something you will never forget. As one charter captain told me, “An overnight trip in the Gulf gives you an experience you will never forget, from a brilliant moon to a sunrise that rivals anything I’ve ever seen. We want people to appreciate the experience and realize it’s not just about catching fish.”

Charter boats provide all the tackle, rigged for the type of fishing you will do, which could mean everything from spinning tackle to 9/0 reels with heavy braid. Information about what anglers need to bring to have an enjoyable and productive trip offshore will be provided by the charters.

During the overnight trip, the captain will likely provide a variety of fishing experiences other than tuna fishing. The captain may do a little high-speed trolling that could produce a wahoo, king mackerel or dolphin fish (dorado or mahi-mahi). You will likely get in a little bottom fishing as well. Greater amberjack season is open until Oct. 31. Although red snapper season is closed, you may catch grouper, scamp, tilefish or vermilion snapper.

Visit our fishing page for more information on the variety of charters available for tuna trips. It could lead to the fishing trip of a lifetime.