Our first vacation to Gulf Shores and Orange Beach claims one of the incredible, bigger than life, moments. We’d never been to the Alabama Gulf Coast before. We planned our trip, packed our bags and headed south to the warm, Gulf waters and wide, sandy beaches. We looked forward to discovering Alabama’s coastal scene: the cuisine, the activities and a catamaran ride to see the dolphins. 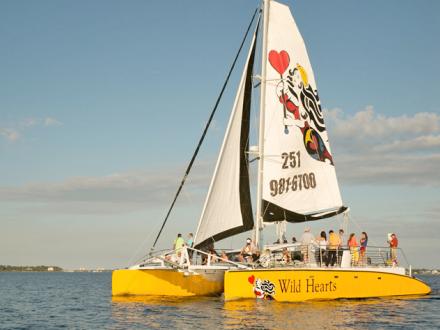 The day of our catamaran tour began sunny, with above normal temperatures for early April. Perfect! We headed to the marina in Orange Beach to meet up with the crew and other guests at Sail Wild Hearts. After check-in, we boarded the catamaran and set off in search of dolphins.

Along the way, our captain pointed out various landmarks on the shore. He shared information about coastal wildlife, especially the dolphins. The crew served snacks, a scrumptious lunch and beverages as we toured the Gulf coast of Alabama and the Florida panhandle.

I couldn’t imagine it getting better…But, of course, it did.

The captain dropped anchor off the coast of Pensacola. He told us we were about to see a tremendous air show — and that we had the best seats in the house. Looking toward shore, we could see the tree line, but the airport runway and grandstands weren’t visible. 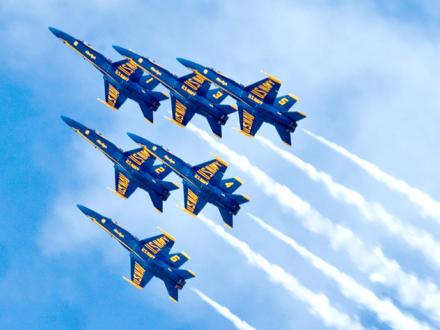 We heard them before we saw them. Engines revved to life and planes burst “through” the trees into the blue sky. The Blue Angels air show had begun. And we watched. Sometimes with breath held.
The airmen performed their stunts and dance of symmetry with such precision over the water, directly above our heads. They’d fly off out of sight and then return, dipping a wing to acknowledge our group as they soared back to their formation. The roar would follow — and linger — as the plane zipped by.

Our captain knew the show well. And the airmen seemed to know him, too. He’d guide us to watch the sky here or there as the show continued. We’d all turn and gaze into the sky, watching as a small dot grew. The planes would roll, dip and dive as they whooshed past.

We felt the power of these machines as the sound reverberated through our bones.

And they’d disappear on the horizon. Only to come back, again and again.

A final, symmetrical dance in the sky, followed by a bow of sorts, as each pilot returned to earth. Their gravity defying show complete.

And we clapped. Not obligatory, but heartfelt, sincere.

After a few minutes, the captain sensed we had absorbed the show, and we sailed toward home.

Along the way, the excitement of the show carried the conversation, all of us sharing the parts we loved best. We gushed our true amazement at seeing these powerful planes dance just above our heads. As the adrenaline rush wore off, we sat, collectively gazing into the Gulf water looking for some elusive dolphins, a perfect exclamation point to a perfect day.

And then, minutes before we ducked under the bridge toward the marina, the dolphins came, showing off their own dance skills as they leaped from the water and dove back in. Just a few minutes. But, somehow, just enough. 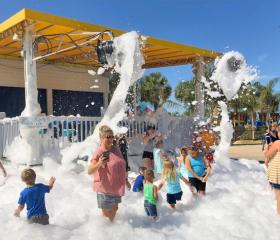 My Top 10 Must-Visit Restaurants and Attractions 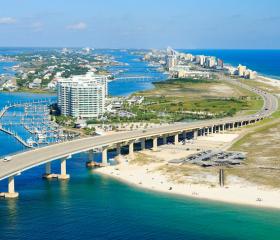 8 Things to Eat, See and Do in Gulf Shores and Orange Beach