Running 30 or 40 miles from Orange Beach to catch a red snapper or an amberjack is very common for center console or cuddy cabin fishermen. 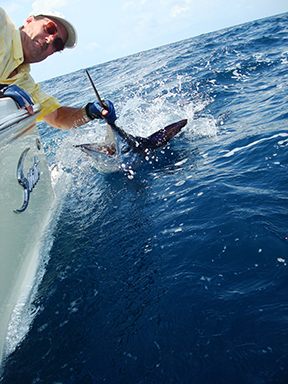 For some, it’s also common to run the same distance, but instead of bottom fishing, they go trolling for biggame fish like marlin, tuna, wahoo, and dolphin. The area about 30 miles southeast of Perdido Pass, where water depth goes from a couple hundred feet to well over 1,000 feet, provides great in-close opportunities for small boats to catch big fish.

“When the pretty blue water pushes in close like it usually does at this time of the year, there is great marlin fishing for almost any size boat,” said longtime captain and tournament fisherman John Dorland on the Cotton Patch. “Over the years, I have seen many smaller boats hooked up on a billfish around the nipple, elbow, or 131 hole. Three or four buddies get out there in a small center console and catch a billfish; it’s just a great sight, because I know they just caught the fish of a lifetime on their own boat, and they did it themselves.”

There is no doubt that big sport fishing yachts with inboard diesel engines ‘raise’ more billfish than a boat powered by a single or pair of outboard motors. They also usually have more hands on deck to clear lines after a strike when a bite happens.

Smaller boats do have some limitations, but knowing those before you leave the dock is a big key to success. “Your boat, crew, and tackle all have limitations, but those should not keep you from catching big game fish,” says Chris Vecsey of Sam’s Bait and Tackle in Orange Beach. “More and bigger are not always better on a small boat. Take advantage of today’s stronger, smaller, faster reels. Reels loaded with braid backing and a mono top shot will catch dang near any fish that swims within fifty miles of the beach.”

Vecsey, who catches lots of big fish from small boats with friends and customers, prefers to fish just four or five lines. “Having fewer lines out can help you land more fish after you get a strike.” That may sound counter intuitive, but the less time your crew has to spend clearing lines the less likely you are to lose a fish due to tangled lines.

However many lines you decide to troll will also afford you chances at other pelagic fish like blackfin and yellowfin tuna along with wahoo and dolphin. These highly migratory fish all converge at the rich waters just off the coast to take advantage of the abundance of bait brought in by strong currents.

Pulling smaller lures, as opposed to just huge blue marlin lures will give you a shot at multiple species as well as a blue marlin should one come into your spread. A ballyhoo/Ilander combination has caught many big game fish on boats both big and small. Including a memorable Mobile Big Game Fishing Club Labor Day Tournament a few years back that we were fortunate to win by catching a blue marlin just thirty-two miles from the jetties.

Using outriggers will allow you to cover more water while trolling as they get your baits outside the prop wash and out away from your boat. Adding a center rigger for pulling baits way, way behind the boat will also lead to more fish. Once you hook a fish, since smaller boats don’t have a fighting chair, a good belt and harness combination will allow you to fight the fish most efficiently on stand-up gear.

Catching a marlin, tuna, or wahoo is certainly easier from a big boat, but if catching these fish from a small boat was easy, everyone would be doing it. Get out there and catch your fish of a lifetime, and if you see “Johnny D” from the Cotton Patch know you just put a smile on his face by doing it on a small boat.