With air and water temperatures slowly going down, as well as the amount of sunlight, one of the Alabama Gulf Coast’s favorite species of fish is about to make a move. Flounder are about to start their fall migration toward the Gulf as they get ready to head into the ocean during the winter months to spawn. 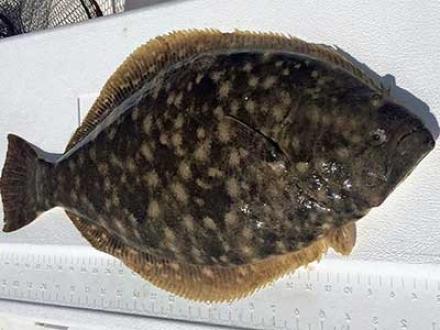 The migration typically runs from October to December, and the fish tend to concentrate in the channels and passes leading to the Gulf. With the current weather pattern of a slow cooldown, the migration will likely be more like a steady trickle. Once we get a hard cold front, it’ll be a mad rush as the water temps plummet.

Unlike other popular inshore species like speckled trout and redfish that cruise around looking for a meal, flounder tend to employ its camouflage to lie motionless on the bottom until an unsuspecting baitfish or shrimp gets within striking range.

That doesn’t mean the flounder won’t congregate somewhat. They will eventually end up in these migration routes that also tend to concentrate the baitfish and small crustaceans, which means anglers can find one spot and catch multiple fish this time of year. Another good thing about fall flounder is that only the adults migrate. That means there can be what local anglers call “doormats” in the ice chest.

Live-bait fishermen tend to use bull minnows for flounder, because the bait is hard to knock off the hook and flounder love them. Flounder will also take live shrimp and minnow-shaped grubs that are hopped along the bottom. Once you catch a fish, slice a strip of belly off the fish and add it to your jig for added enticement.

For those who love to get a little exercise as well as a nice stringer of flounder, fall is a fantastic time for gigging flounder. Of course, you’ll have to wait until this little weather event passes us by, but when the weather settles down, head out to the beach with a good light and gig for loads of fun.

The ideal conditions for gigging are calm or very little wind with a rising tide. A mild to moderate north wind will smooth out the front beach and make it a lot easier to spot the flatfish lying camouflaged on the bottom, settled in the sand. If you haven’t done any gigging before, you’re probably going to spook a fish or two before you get the hang of spotting them.

When you do spot one, keep the light on the fish and approach slowly. When you’re ready to thrust the gig, aim low. The refraction of the water will make the fish appear to be farther than it really is. If your aim is good, keep your gig stuck in the sand while the fish thrashes about or you’ll lose it in a hurry. Some people make a scooping motion and toss the fish on the beach, but I find it’s better to slowly inch up to the fish and place my hand under the fish, obviously avoiding the barbs of the gig.

Concentrate on the sandy stretches of the beaches and bays when you’re looking for spots to go flounder gigging. Sandy bottoms tend to hold baitfish better than the muddy bottoms.

The flounder bag limit in Alabama is 10 fish per person with a 12-inch size minimum. A saltwater fishing license is also required. (check for updates)

However, I recommend a minimum size of 14 inches when you’re gigging because a 12-inch fish really isn’t that big.