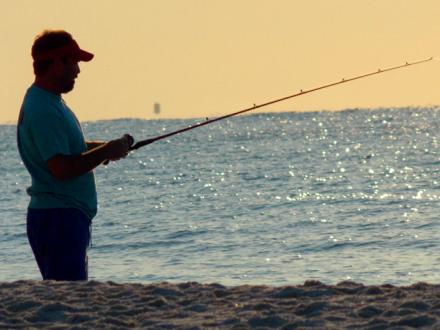 If you’re looking for that perfect Christmas gift for the inshore angler and the budget is, shall we say, limitless, then take a look at the “Cadillac” of fishing rods from G. Loomis. The NRX “Mag Rod” Inshore spinning rod series offers fast and extra-fast action. The new nano-silica resin system that allows us to use less material without losing strength. Plus, these rods are rated for braid, which means they’ll stand up to that hard shock when he sets the hook. Rods have titanium-framed, SIC K-frame stripper guides that are designed to keep braided line from tangling on the frames at the stiffest point of the rod. After the first three K-frame guides, nickel-titanium RECOIL guides are used to reduce weight and increase the rate of recovery for the tip for increased casting distance. The rods carry a limited-lifetime warranty.

Stepping down a notch to about $300, the Legend Tournament Inshore rods by St. Croix employ SCIV graphite construction in 10 one-piece, fast-action models, seven spinning and three casting. The rods feature Kigan Master Hand Zero Tangle guides, a Fuji TVS (spinning) or PTS (casting) reel seat, and a Belize blue metallic finish. The rods come in line classes from 6- to 12-pound through 17- to 40-pound, and lengths of 7, 71⁄2 and 8 feet to cover every inshore fishing situation.

Drop down another $100 and you can buy that avid angler a St. Croix Mojo Inshore rod that has a medium-power, fast-action blank designed with St. Croix’s popular SCII graphite. All spinning rods measure 7 feet or 7 ½ feet. Features include a Fuji DPS reel seat, hard aluminum-oxide guides with corrosion-resistant frames, premium-grade cork handles and a five-year warranty. The fast-action design is best suited for fishing artificials, including soft plastics, on ¼- to ½-ounce jig heads, poppers, walk-the-dog baits, popping or rattling corks, weighted paddle tails and spoons. That covers just about every bait an inshore angler would need.

For those on a limited budget, look to Shakespeare and UglyStik for a variety of rods that is easy on the pocketbook. Plus, Lew’s has the Speed Stick Rod for $79.95. 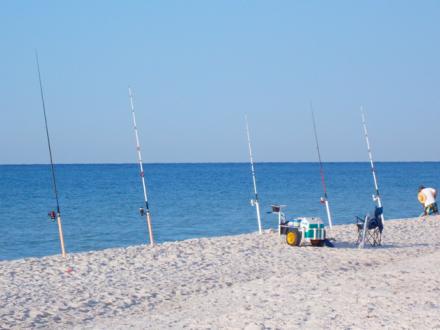 If the budget can’t handle the Exsence, you can drop down to the $150 mark and still have a fine reel with the Shimano Ultegra, which includes many of Shimano’s signature technologies for added performance and durability. To improve casting distance and line management, the Ultegra reels utilize Shimano’s Aero Wrap Oscillation, which layers the line onto the spool in a crisscross pattern for reduced line-to-line friction. It also reduces the tendency to “throw loops” with conventional spinning reels.

Still too much, try the Abu Garcia Orra inshore reel for $129 or the Shimano Nexave for $60. Avoid the spinning reels with rear drags, which tend to end up with saltwater intrusion and can ruin your day on the water.

The latest addition to the DOA Shrimp family is the 2.75″ Shrimp with nite-glow pink eyes and a keel weighted hook – this unique arrangement allows the 2.75″ Shrimp to ride upright in all current conditions. For those who like to troll for the inshore species, Bomber has developed the new Jointed Wake Minnow. The lure runs just under the surface and creates a wake that fish often can’t resist. Also Roadrunner Lures has come out with the Go Go Runner that should work like a champ when you’re on a white trout bite.

Ande, a leader in monofilament fishing line for more than 50 years, adds Ande Braid to its lineup. The beauty of braid is there is virtually no stretch, and you feel every little nibble. Ande’s graphite-colored braid promises less noise while going through the guides, and longer and smoother casts. Available from 20- to 150-pound-test in spools from 325 to 3,250 yards.

To contribute to the battle against breast cancer, Seaguar introduced the Pink Label fluorocarbon leader this year. It delivers superior strength, better abrasion resistance and minimal stretch. Seaguar claims 30 percent better knot strength than other fluorocarbons. Available on 25-yard spools from 15- to 80-pound-test and 25-yard coils from 100- to 200-pound-test.

Rapala has catch-and-release in mind with its newest scale. Instead of the standard hook that most scales employ, Rapala has replaced these standard hooks with fish-friendly grippers, which makes it easier to release the fish unharmed.