One of the great features of the beautiful Alabama Gulf Coast is the quality of the surf fishing year-round. Anglers can hook a variety of species right along the water’s edge almost all year long, with the exception of a few harsher days during the winter.

That means surf fishing is on fire right now and will last through the fall. During the heat of the summer, you may have to change tactics a little by fishing in a little deeper water in the holes scoured out by the wave action. In the spring and fall, the fish are all along the shoreline. 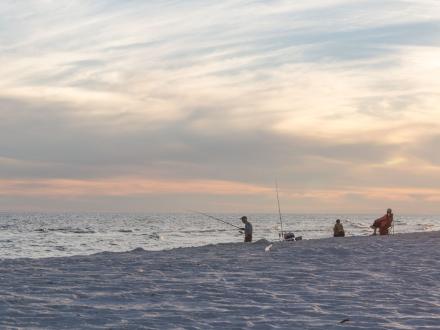 Right now, pompano, whiting and flounder are hanging around in the usual spots along the sandbar, usually the first one closest to the breaking surf. Those breakers stir up the bottom, and sand fleas, ghost shrimp and other invertebrates are easy pickings for the fish.

Orange Beach and Gulf Shores have several tackle shops that stock tools you’ll need to scoop up sand fleas (mole crabs) and a pump to slurp ghost shrimp out of the surf. The ghost shrimp extruders are made out of PVC pipes that suction the crustaceans out of their holes in the sand. If you find the right spots, it won’t take long with the extruder to get enough ghost shrimp to last the fishing trip. If you’re having trouble catching your own bait, head to the tackle shops and grab some frozen sand fleas if they have them or some fresh dead shrimp. Pinch off a bit of the shrimp, peel it and stab it onto the hook. Almost everybody fishing the surf these days adds a little square of Fish Bites for added enticement.

Most surf anglers use a double-hook rig with the lightest pyramid weight allowed, depending on the surf and current conditions. If you can get by with a one-ounce sinker, go with that as long as the sinker remains stationary. Go up in sinker size if it starts rolling around in the surf. A 1/0 or #1 hook size is usually best for pompano. You can use either a bait hook or a circle hook. Whiting rarely exceed two pounds, so you use lighter tackle if the whiting bite is on.

Scouting is important for surf fishing. Look for water and surf conditions that the fish prefer. Clearer water allows the fish to easily spot a meal in the surf. Also, look for the darker water, which indicates more depth, and look for any irregular features in the sandbar where the predator fish like to ambush their prey. 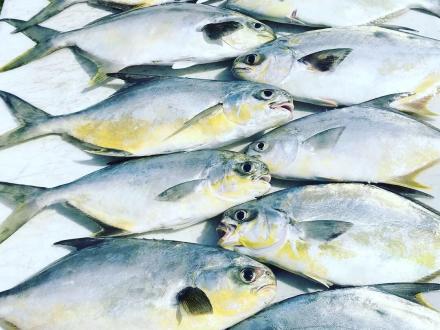 From the middle of May through August, most people visit the beach, and it can get crowded. Avoid the high-traffic areas and find a spot where fishing won’t interfere with the sunbathers or swimmers. Although you can often catch fish all day, the best fishing is usually during low-light conditions of the early morning and as the sun starts to set. During those times, the beach will be less crowded as well.

If patience is not a virtue and you don’t like relaxing in your beach chair waiting for a bite, then pick up a casting or spinning rod and head down the beach with a pompano jig (also found at the bait and tackle shops) and try to cast to the first sandbar and hop that jig back to the beach. The hopping action of the colorful jigs can sometimes prompt a pompano to strike. Redfish and black drum will also run the beach at times and can provide a whale of a fight.

Alabama’s length limit on flounder is 14 inches, with a daily bag limit of 5 fish per person. The pompano length limit is also 12 inches, but the daily bag limit is three fish per person. There is no limit on whiting. The redfish limit is three per person with a slot limit of 16 to 26 inches, with the exception that one fish larger than 26 inches is allowed. If you happen to beach a large redfish, take a photo and return it unharmed to the water. Those “bull” reds are not good table fare.

Plan a trip to the beaches today, and don’t miss the chance to enjoy one of the Alabama Gulf Coast’s most accessible fishing opportunities.