Through the Years with Alabama's Beaches

I can always feel a smile creep across my face when newbies to the Alabama beaches remark about how beautiful the beaches are. I think it’s partly because I know it’s true and partly because it’s nice to hear others reaffirm what we born-and-bred Alabamians already know. 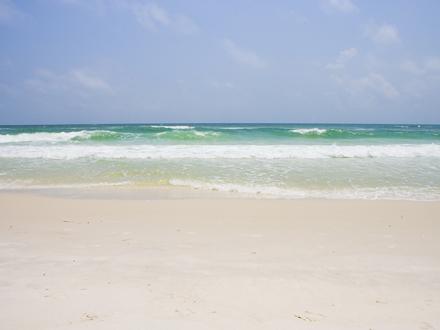 Sugar-white, sandy beaches that are well kept and gently washed with turquoise-kissed Gulf of Mexico waters is something we probably take for granted. But when visitors ask, it’s reminiscent to walk through the years with Alabama’s beaches, explaining why we visit over and over with the same prideful voice as a brand-new mom.

Gulf Shores history includes a strong influence of Native Americans (Creek, Choctaw, Chickasaw and Cherokee) followed by Spaniards in the early 1500s. These Spaniards came to the current-day Gulf Shores area and were responsible for building Fort Morgan (which was rebuilt in the 1800s), an important factor later on in the Civil War. Along with Fort Gaines, the two sites hosted many conflicts between the Union and Confederate soldiers and sailors, both looking to control the harbor entrance. Fort Morgan is a popular attraction still today and Fort Gaines has battle re-enactments twice a year in May and October.

It’s interesting to note a couple of events that lured folks to the Gulf Shores area, helping to increase the population:

The Gulf Shores Museum is a wealth of Alabama beach history demonstrated through exhibits in an inviting atmosphere. There is also a Butterfly Garden and a popular summer youth program. Admission is free and it’s a great start to learning about the area. Originally constructed on West Beach as the family beach house for Mobile’s Valerie Cole, the house was moved to Gulf Shores in 1979 following Hurricane Frederic. Later the Cole family donated the home to the city where it’s been in use since 1982 as a library first, and then as a youth center before becoming Gulf Shores Museum. The land it sits on was donated, as well as the steeple that sits in the garden, further demonstrating the generosity of this community.

Hurricanes are nothing new to coastal communities and Gulf Shores is no different.  Below are some examples of devastating storms of yesteryear that changed the shape of the area. 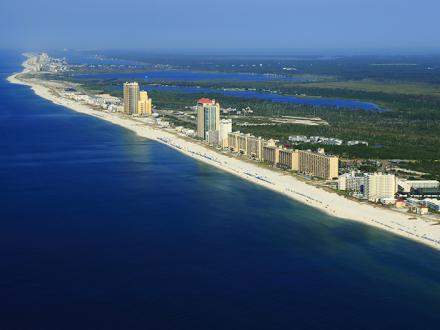 If you are familiar with Alabama beaches at all, you understand the confusion with Gulf Shores and Orange Beach. Some folks say they’re headed to Orange Beach when they are actually vacationing in Gulf Shores, and vice versa. While the two cities are neighbors, they occupy different beach spaces. But don’t worry… you will be close enough to enjoy the amenities and attractions in both communities.

Orange Beach – founded similarly to Gulf Shores and with original settlers being Native American – had industries of forestry, turpentine, naval stores production and a shingle mill. The late 19th century saw the depletion of the forestlands in the area. They were replaced with orange groves, and there is the name origin for Orange Beach! Unfortunately, Orange Beach freezes were too much for the groves and by 1926, the citrus crops were no longer in the area.

Tourism developed into the main industry over the years following the completion of the Intracoastal Waterway. Today, vacationers visit the area to enjoy some of the most gorgeous beaches in the United States – and I would argue, in the world! Charter fishing is still a highlight for locals and visitors, along with water recreation. Restaurants are plentiful, offering fresh seafood catches in farm-to-table venues that are mostly casual and serve the entire family.

I have grown up with Alabama’s beaches, and nostalgia always pulls at my heartstrings when I revisit. From humble beginnings to a thriving tourism mecca, Gulf Shores and Orange Beach offer world-class beach facilities that my family adores. Explore the area, visit the landmarks, stay in amazing accommodations and taste the culinary delights. Your walk through the years with Alabama’s beaches may only be beginning, and that’s ok. You’ll be back… again and again.

Becky Beall (1323 Posts)
Becky J. Beall is a freelance travel writer serving print and online markets as well as a travel radio show host (The Travel Voice by Becky on iHeart Radio). She is also the travel expert for Fox 6…