Very little prepares you for the adventure of deep sea fishing in Orange Beach.

Growing up, my dad was the fisherman in the family. So I’d tag along and cast my line for trout in Arizona’s White Mountains, catfish in Texas and mullet in North Carolina’s coastal surf. Last May, I finally got my chance to experience deep sea fishing in Orange Beach and add that to my list. But it was unlike anything I’d ever done.

1. A great crew makes ALL the difference. The old saying “There is no I in team” holds true with deep sea fishing. The Gulf is a massive expanse of water. A great crew puts you out on top of the fish, helps with gear, cleans your fish and ensures you have a great time.

If you are new to deep sea fishing, like I was, a great crew will not only tell you, but teach you how to fish. When they do THAT, you become hooked and want to go back out again and again.

2. Red snapper are easy to catch and release. Red snapper are abundant in the waters off Orange Beach. On our six-hour charter, it wasn't uncommon for everyone aboard to catch snapper larger than 20” long. On our trip, you simply had to set the hook down and we’d catch one, if not two at a time.

High red snapper numbers are due in part to artificial reefs just off the coast. Unfortunately, federal mandates restrict the red snapper season, which may attribute to the larger fish. When you catch one outside of that season, you’ll feel the joy of catch and release.

3. You come away with fish stories. Having a “whopper” of a fish tale is just part of deep sea fishing’s allure. Every fisherman/woman has a story. Mine is about the “Fish Whisperer.” One of the ladies I went out with last year earned that well-deserved nickname. Every time she touched a rod or line, a fish would bite. It was a lot of fun to watch! Out of all of us that day, she caught the most fish, the largest fish, and the one that put up the biggest fight (an amberjack). I didn’t have the haul she did that day, but I did whisper up lunch. I caught the mahi mahi that became fish tacos at lunch.

Fish stories are the tales you can tell your friends and family who weren’t with you. But the true joy is being able to regale that time with the people you shared the experience with. It’s a memory like no other.

4. You’ll never have a meal better than the one you caught yourself. Everything for me starts and finishes with food. So one of my favorite things about deep sea fishing in the area is the hook-and-cook restaurants. Many of these restaurants are steps away from the marinas where charter boats dock. You can take them your fresh catch and they’ll cook it to order. It’s a delicious way to end a fishing trip.

5. Dolphins signal the end to your day of fishing.  The sight of a dolphin from the shore is a welcome sight to beachgoers. But a dolphin sighting on a fishing charter signals the end. Where there are dolphins, there are no fish. Fish are prey to dolphins and so they scatter and flee the area. When you are on the boat in the Gulf, you can have one or the other, but not usually both – unless the dolphins show up at the end of a six-hour fishing charter. 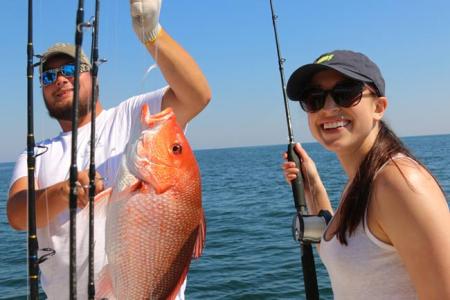 Nicky Omohundro (1323 Posts)
Nicky is an active mom of 3 who wants to help you leave "No Child Left Inside." She enjoys getting outdoors and traveling as a family to bring you new ideas and inspire you to find your own adventure…