Leave Only Footprints: It's not just about the litter 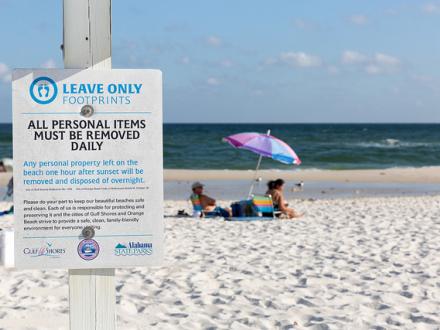 Several years ago, community leaders realized we had a serious problem… many problems, actually. The sea turtles weren’t nesting like they used to. Birds were so comfortable around humans, they got bold — sometimes taking food right out of peoples’ hands. The balance of sea life was, well, imbalanced.

The challenge: How to balance beach fun for people with a healthy ecosystem for wildlife?

Every year, more than five million people come to Alabama’s beaches to vacation — whether for the wide sandy beaches, great fishing off the pier, or other water sports, shopping and activities.

City, state, business and concerned citizens organized in 2007 to create a sustainability program for the beaches to protect valuable natural assets. In 2015, the Beach Litter Program was added to further protect the health and safety of the beach, surrounding waters, animals and, of course, beachgoers.

The program has been a huge success! Local hotels, condos and businesses have all pitched in, promoting the program with flyers and pamphlets to educate guests. Staff and volunteers have committed to preserving the beach through a number of initiatives. And, eco-volunteers have done an amazing job to protect the dunes and sea turtle nests. The whole community has rallied around healthy beach living, and there has been great progress.

In 2016, the area earned two noteworthy awards: The Alabama Tourism Department Partnership Award and the Alabama PALS Governor’s Award. The Alabama Tourism Department Partnership Award recognizes the successful partnership between the Leave Only Footprints initiative with the cities of Gulf Shores and Orange Beach. It recognizes the importance of the campaign on sustainability, protection of valued natural resources, and continued tourism success. The Alabama PALS Governor’s Award recognizes the commitment to litter control, recycling, local cleanup efforts, environmental education and volunteerism. 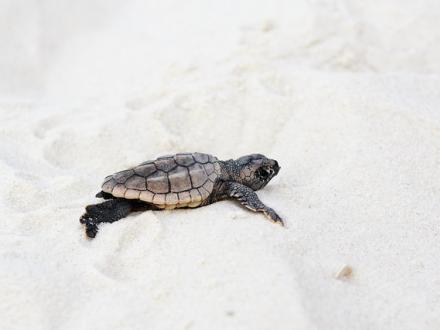 How can you support the Leave Only Footprints Initiative?

Continued success depends on your commitment to supporting these efforts. Of course, keeping the beaches litter-free is a great start. Use those recycling bins to help control our landfill use.

As you leave the beach each day, take everything with you! Don’t leave chairs, beach toys, towels, or tents behind. Every night, crews clear the beach anyway so that these items don’t get lost in the Gulf and to protect the turtles as they navigate between land and water.

Don’t touch — or feed — the wildlife! It might seem innocent enough to feed part of your sandwich to the friendly bird who comes close, but it’s really harmful to the bird. Their natural diet does not include sandwich bread. Even more important, when you hand-feed a bird, it can become dependent on those handouts to survive. That interrupts its natural role in the food chain that keeps our beach healthy.

Stay away from the dolphins. Maybe you’ve seen videos of people who caught a shark or dolphin at the beach and passed it around so everyone could get a cool photo? But then, the creature dies. While those experiences are rare, it’s equally harmful to get too close to their habitat or to scare them with loud noises. When we interrupt their natural life, we could be disrupting their migration pattern, breathing, breeding, feeding and sheltering. When we feed them, we reinforce begging behavior and they lose their natural, healthy fear of humans. They get too close to boats and can be injured or killed.

Never touch a sea turtle or its nest. NEVER! Most species of sea turtles are on the endangered list, and any human contact with a sea turtle or its nest is extremely harmful. If you see a sea turtle on the beach or in nearby waters, move away from it so that you don’t disrupt its natural behavior. Turtles need us to stay away to survive. Other sea turtle initiatives at Gulf Shores and Orange Beach include lighting changes on the beach side of resorts and houses, removing tents and structures after dark, and muted lighting on flashlights. Respect the rules to help the turtles make a comeback!

Take photos of sea shells, but leave them at the beach. Sea shells actually house little critters you might not even notice. But, many sea animals and birds know those critters are there — that’s their food! If you take sea shells home, the food cycle is broken. And if you’re thinking, “It’s just one shell,” imagine if all five million visitors each year took “just one shell” home.

Don’t dig big holes in the sand. Not trying to be a buzzkill here. Of course, kids love digging holes in the sand! If you dig a hole, fill it before you leave the beach. Holes are hazardous, particularly to sea turtles and humans. In 2016 alone, beach volunteers filled in more than 2,000 holes to protect beachgoers.

And, of course, recycle. The less garbage that goes into landfills, the healthier our community can be. Recycle what you can to cut down on waste.

To learn more about the Leave Only Footprints beach initiative and how you can help, click here.