Many visitors to Alabama’s Gulf Coast are unaware of a destination that holds hidden treasure on the west side of Gulf Shores.

The reason the future looks so promising for the shallow body of water is the construction underway at Little Lagoon Pass. The Lee Callaway Bridge is being rebuilt to widen the pass significantly. The channel leading to the Gulf will also be deeper, allowing for much better water exchange, which will enhance the fishing prospects.

Speaking from experience, huge speckled trout (spotted seatrout) live in the many deeper pockets in Little Lagoon. The largest trout of my fishing career, 6 pounds, 9 ounces, came from the lagoon.

As far as Jay Gunn of J Hook Inshore charter service is concerned, there are plenty more big trout in the lagoon, as well as drag-stripping redfish, platter-sized flounder, and several other species to round out a fishing trip.

“Most of the time, somebody is going to catch a big speckled trout in the lagoon almost every day when the conditions are decent,” Gunn said. “It gets a little harder during the dog days of summer, but it still happens.”

While you’re catching plenty 16- and 17-inch trout, Gunn said not to be surprised if you suddenly hook into what many refer to as a “gator” trout from 5 to 7 pounds. If you’re always after the big fish, Gunn recommends hard baits like MirrOlures or topwater baits. Although the strikes will be fewer, the size will be bigger.

Gunn also recommends moving around and drifting until you locate the fish because Little Lagoon doesn’t really have a fishing pattern.

“You just keep moving around until you find them,” he said. “They may be in a different place every day. That may change a little when the work on the pass is completed. The deeper pass is definitely going to help. It’s probably going to generate more current on the tide changes, which always helps the fishing. When the pass is clogged with sand, it doesn’t allow the baitfish and fish larvae to come in through the pass. The rule for almost any body of water is that the more water flow you have, the water quality is better, and the fishing is better.”

When the weather gets a little too rough for fishing in the Gulf or other unprotected areas, Little Lagoon can provide a protected place to fish. Gunn recommends light spinning tackle with 10-pound test line because of the clarity of water. If the fish aren’t hitting lures or plastic grubs and shrimp imitations, he’ll go to bull minnows, menhaden, and alewives. He uses live shrimp only during the cooler months because pinfish will likely steal the bait when the water warms up.

What appeals to many anglers is the variety of species of fish that also include white (sand) trout and big croakers.

“Add all those together, and you’ve got a nice box of fish at the end of the day,” Gunn said.
Recent torrential rains added a significant dose of fresh water to the lagoon, but it should be back to normal after a week of tide cycles because the pass is now open. 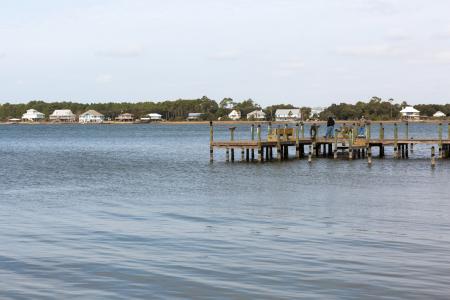