Dish Up Fun and Food with These Fall Beach Events

Food and music are the stars at fall festivals on the Alabama Gulf Coast. Tempt your taste buds and kick up your heels as you revel in the flavors of the South. 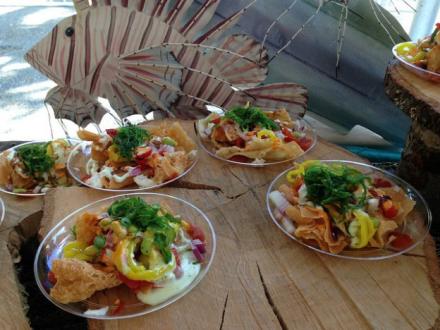 First up this fall is the Alabama Festival of Flavor on October 3 in nearby Foley. This festival features locally grown and produced food, wine and craft beer. Relax and unwind as you amble through downtown, savoring the flavors of unique dishes prepared by chefs and sipping specialty wines and beers. Football fans can even catch their favorite team on the big screen in the Game Day Tent.

Get ready for one of the biggest parties of the year – it’s the 44th Annual National Shrimp Festival October 8 to 11 in Gulf Shores! Get your shrimp boiled, fried, skewered, stewed, steamed, blackened or grilled. Try other delicacies of the land and sea as food purveyors line up to tempt you to try alligator, funnel cakes or any number of treats. The National Shrimp Festival features a variety of musical acts and a juried art show, as well as arts and crafts. There are games for kids, Outdoor World, Shrimp Festival Idol and a sand sculpture contest. There are also 10K and 5K races, with proceeds benefiting Gulf Shores and Orange Beach schools.

Festival goers can sample award-winning recipes prepared by local chefs featuring 200 pounds of shrimp supplied daily by sponsors such as the Organized Seafood Association of Alabama and Zatarain’s. It’s a shrimply delicious time, and one you won’t want to miss.

Enjoy some of the best music around during the Frank Brown International Songwriter’s Festival November 5-15. It’s ten days of musical acts performing in venues from Pensacola and Perdido Key to Gulf Shores and Orange Beach. Hear Grammy award-winning songwriters during this annual event. Get in tune with what’s going on

You never know what tantalizing creations you’ll discover during the 8thAnnual Oyster Cookoff November 6-8 at The Hangout in Gulf Shores. Celebrity and local chefs will showcase their favorite oyster recipes and vie for prizes during the cookoff. Admission to the festival is $10, and tickets may also be purchased to sample the succulent creations. Admission to the Friday Craft Beer Festival is $40 and will include the craft beer tasting, wine, moonshine and champagne. An oyster shucking contest, blind taste test, cooking demonstrations and live music are all part and parcel of this savory festival.

Planning to attend one or all of these great events? Check our website for special rates for these festivals.