The upcoming Labor Day weekend not only marks the end of summer, but it also closes out the big game tournament season along the Gulf Coast. As much as the competing teams want to catch the big one, spectators, especially kids, watch a chance to see the big one! 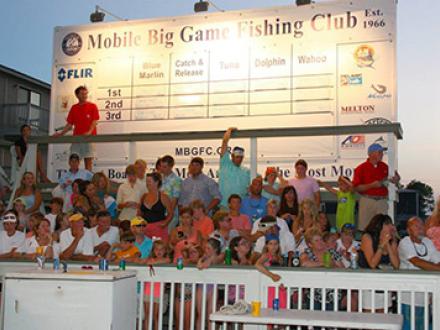 Families visiting on this holiday weekend will get their chance to see the Gulf’s biggest fish up close. The Mobile Big Game Fishing Club will host the 48th annual Labor Day Invitation Tournament September 4-7 at its clubhouse at Orange Beach Marina. The holiday weekend brings fans of all ages to the bleachers at the weigh dock as boats back in to unload their tournament bounty.

“We always have a great crowd on the Sunday of our tournament as teams return from two days offshore,” said MBGFC Vice President of Tournaments Burley Shedd. “The locals are pretty familiar with the fish in our tournament. But with the beach packed with visitors from all over, it’s a chance for non-locals to see a tuna, mahi-mahi, wahoo or blue marlin up close.”

Of course, the biggest draw for the Labor Day Tournament is the chance for someone to win $1,000,000. For years, the MBGFC has offered a million dollar prize to anyone who breaks the Alabama state record blue marlin during the tournament. The current record is 845 pounds, and most believe there is bigger marlin in the Gulf.

“If you look at Florida, Mississippi and Louisiana, all of their blue marlin state records are over 1,000 pounds,” said Shedd. “If a boat leaves from the panhandle of Florida, Orange Beach, Biloxi or Venice, Louisiana, they all end up fishing in the same areas of the Gulf. Where the other state records have been broken is the same water Alabama fishermen are trolling during our tournaments. We’d love to see one of the tournament teams bring in that new state record and get the million dollars.” To qualify for the Alabama state record, teams must leave from an Alabama port and return to an Alabama port without making landfall in another state.

The weigh dock opens at 4:00 on Sunday, September 6, and boats will be steadily coming in throughout the evening. There is no charge to watch the weigh-ins.

Teams can register online for either the Labor Day Tournament or the Outboard Shootout at MBGFC.org.