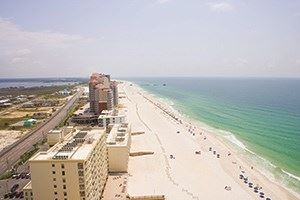 Fall on the Alabama Gulf Coast features pleasant temperatures and less-crowded beaches. During this time, our lodging partners will be offering lower rates in both Gulf Shores and Orange Beach. Whether you'll be in town for the 2015 Alabama Adult Combo Tennis State Championships (40's & 55) on October 22-25 or if you're planning to arrive early in anticipation of the 2015 SEC Women's Soccer Championship that starts November 2, you'll find that it's a wonderful time to land on the Alabama Gulf Coast.
A busy October is in store for visitors with plenty of spooky fun! Have you signed up to participate in the Alabama Gulf Coast Relay for Life Trick or Trot Halloween 5k run/walk & 1-mile fun run? This event will benefit the Alabama Gulf Coast Relay For Life. Put on your scariest, craziest or most outrageous Halloween costume and head to the starting line on October 24. The event will be held from 3:00 until 4:30 p.m. and costs $25 per person.

This year, the 4th Annual Treasure of the Isle Halloween Costume Party will be held at the Orange Beach Community Center on Saturday, October 24, 7-11 p.m. You'll find food, fun, music, and a chance for a prize for the best costume! Tickets are available for $25 per person in advance and $30 at the door.

How about a Halloween Costume Contest at the Flora-Bama? All those who dress up will get in for free, and everyone will have a chance to compete for more than $2000 in cash and prizes, including a Mexico getaway! Contest starts at 9 p.m. on October 31.

Are you a foodie? Take a drive to nearby Elberta on October 31 and you'll find the Original German Sausage Festival. This event will provide you with German sausage made from a secret recipe developed by the town's founding fathers. The festivities will also include arts and crafts, live music, carnival rides, baked goods and more. While you're there, stop by the Bier Garten for a large selection of imported beers.

Are you making your plans now to book a beach getaway in October?