Editor’s note: We thank you for loyally reading our What’s Biting blog each week. As we transition to cooler months, look for a new post every other Wednesday until March 2016. The next What’s Biting post will appear November 11. 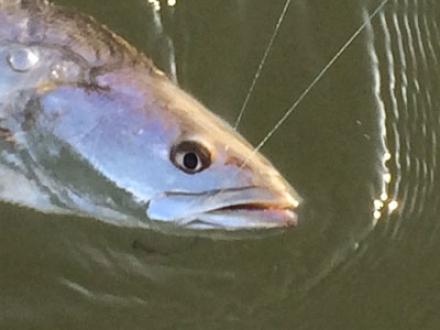 Fortunately for those of us who love to catch speckled trout in the fall, the weather and water conditions are starting to cooperate.

“The trout were about two weeks behind,” said Jay Gunn of JayHook Inshore charters (251-752-8040). “The water temperature has just now gotten low enough for the fish to go up the rivers and look for the white shrimp.”

Each year, the popular inshore species like speckled trout (spotted seatrout for you purists) and redfish (red drum) start moving out of the open bays and move into the heads of the estuaries, rivers and creeks that hold brackish water when the cooler weather patterns allows more saltwater to travel up these bodies of water.

Like Gunn said, the reason for the move is obvious. That’s where the bait is heading, and the fish always follow the bait.

“The trout fishing is getting better by the day in Bon Secour, Magnolia and Fish Rivers,” Gunn said. “Wolf Bay will also hold some fish this time of year. There are some trout heading into the Perdido Bay tributaries, both most of the fishermen are finding plenty of redfish in those areas around Orange Beach.”

Right now, anglers are using natural and artificial lures. It’s hard to find a time of year when any of the game fish won’t take a live shrimp, so anglers are floating live shrimp under a popping cork. The other successful method is casting a quarter-ounce jighead with a minnow-type plastic body. Lunker City’s Fin-S-Fish and the Gulp lures are consistent performers in the artificial line.

“You can catch some on MirrOdines (a hard plastic bait made by MirrOlure),” Gunn said. “That bait should get better as the fall progresses.”

Gunn suggests looking for likely ambush points, casting up current and letting the bait drift past those ambush points.

“The fish are moving up on the ledges in shallower water,” he said. “They will hang out on these ledges until it gets really cold, usually around Christmas.”

The weather forecast for this week is for us to get some much-needed rain. This El Nino weather pattern has really made the Deep South a dust bowl, so we need the precipitation. Unless we have an unusual rain event, the fishing conditions should not change much, which means the water will be stained, allowing anglers to use their normal tackle.

“I’m still using 10-pound line right now,” Gunn said. “If the water gets really clear, I’ll go down to 8-pound test. During the summer, I’ll use a leader because I’m fishing around a lot of structure. This time of year, I tie the line straight to the hook, no leader.”

Enjoy the cooler weather and head up the rivers and estuaries to find the fall-season fish.