Catch the Greatest Show in Sportfishing

The Blue Marlin Grand Championship at The Wharf in Orange Beach has become such a popular tournament for big game anglers that the field has been expanded to 85 boats.

Demand was so high for a slot in this year’s championship, which is set for July 10-15 at the Alabama Gulf Coast’s premier vacation and fishing destination, that tournament officials decided to ditch the previous limit of 60 boats. 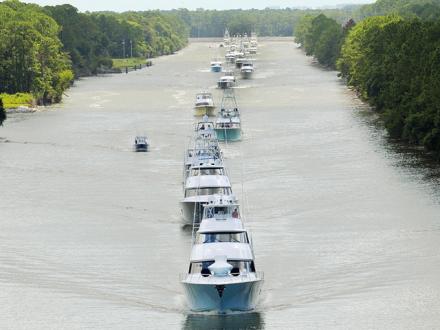 In what has become a yearly tradition, the Blue Marlin Grand Championship (BMGC) holds a special event when the tournament field is full. When the 85th boat files its registration form, every boat that registers after that goes onto an alternate list. Those on the alternate list have another way to gain entry into the popular tournament.

The 86st entry is the St. Jude Position, a VIP entry with special recognition throughout the tournament and even a prime boat slip included at The Wharf Marina for the week.

Participants are required to submit sealed bids with a minimum bid $10,000. The highest bidder is awarded the VIP St. Jude Position. The proceeds from this entry go directly toward funding St. Jude Children’s Research Hospital, which is on the forefront of finding cures for childhood cancer and other life-threatening diseases. The BMGC St. Jude Position has raised more than $107,000 since its inception.

New this year, is the inaugural Blue Marlin Miler at The Wharf. The 5K run and 1 mile fun run/walk benefits St Jude Children’s Research Hospital and takes place during the on Saturday, July 14 during the Championship. The $30 registration fee includes a t-shirt and post-race activities.

Activities for the participating fishing teams start on Tuesday July 10th with the Crew Fest Party presented by Galati Yacht Sales and Viking Yachts. Not only will there be great food and refreshments, the Triple Crown Challenge Fighting Chair Contest presented by Pompanette will be held at the former Cowgirls on Main Street across from the Ferris Wheel.

On Wednesday July 11th, the team check-in and optional entry registration will be available from 10 a.m. to 5 p.m. at tournament headquarters in the marina office. A tournament rules meeting is set for 6:15-7 p.m. at The Sands on the second floor above the marina office. While the participating teams head for the kickoff party at the Driftwood Bar and Grille at 7 p.m., the general public is invited to the Wharf Street Party and Billfish Boat Show on The Wharf’s Main Street. The nightcap will be the Miss Billfish Contest on the tournament stage at 9.

Boats are allowed to depart from the Wharf Marina at 11:01 a.m. on Thursday, July 12th, and spectators can watch from Canal Road as the participating boats begin their journeys to the Gulf of Mexico.

After a day-and-a-half of fishing, boats can head back to The Wharf Marina and weigh their catch from 5-7 p.m. during the tournament weigh-in, sponsored by Saunders Yachtworks, with Jim Cox as host.

The grand finale on Saturday, July 14 is called “The Greatest Show in Sportfishing” as the dedicated anglers weigh in some of the largest fish found in the Gulf. With weigh-in scheduled from 5-10 p.m., spectators can watch the boats bring in giant blue marlin, yellowfin tuna, wahoo and dolphin.

In fact, the Alabama state record for blue marlin was set at the BMGC in 2013 when Chris Ferrara, fishing aboard Reel Fire, brought in an 845.8-pound blue to The Wharf scales. That record stands today.

Also expect yellowfin tuna larger than 170 pounds to be weighed in as well as 70-pound wahoo and 40-pound dolphin (mahi mahi).

The venue couldn’t be better for spectators, who can park for free in The Wharf’s parking decks and then find a good vantage point, around the blue marlin statue or on the boardwalks and the second-floor balconies.

And, if there’s a break in the action, numerous restaurants are close by to meet everyone’s dining preferences.