Red Snapper Opens for Recreational Anglers on May 22

It’s time to batten down the hatches and make sure boats are seaworthy for the trip into the Gulf of Mexico. Red snapper are so abundant along the Alabama coast, that some anglers have success within 10 miles of the shore. However, the most productive areas for snapper anglers is in the artificial reef zones about 20 miles from the beach and beyond.

Don’t forget to stock your snapper tackle box with circle hooks that are not stainless steel or offset when using natural baits, which is used by the vast majority of anglers. For those who may not be that familiar with circle hooks, don’t try to set the hook. When you feel a good bite, just start reeling and the circle hook will slide down the fish’s throat and hook the fish in the corner of the mouth. The hook has little chance to damage the fish and makes catch and release much easier

If you’re booking one of Alabama excellent charter boats for a snapper trip this year, you won’t have to worry about fishing equipment. That is all furnished on a charter trip.

For private recreational anglers, it depends on what kind of fight you want. You can go with lighter tackle if have the experience, but the longer the fight, the better the chance of losing a big fish. However, sometimes those big fish are wary and won’t hit anything but lighter rigs. The typical snapper set-up involves heavy rods with reels capable of holding 50- to 80-pound test line. The current will determine how much lead weight you’ll need to keep your bait in the strike zone, so take a variety of weights. If you’re not sure about what to use, head to one of our bait shops on the Alabama coast, and they’ll fix you up.

After operating under an exempted fishing permit (EFP) for the past two seasons, the Gulf Coast states have been granted regional management of the red snapper fishery. Each state gets a quota and the individual states set their own season dates, bag and size limits. Alabama’s 2020 private angler red snapper season opens the Friday of Memorial Day Weekend and is scheduled to end on Sunday, July 19, 2020. For the 2020 season, the Alabama Marine Resources Division decided to allow snapper fishing on Monday to ease the overcrowding on the weekends, which means the private recreation anglers can fish Friday through Monday until the season closes.

Alabama’s charter boat industry will remain under federal regulations in 2020. The charter boat season also opens on June 1, but it is open daily through August 1.

Remember that all red snapper must be reported through the mandatory Snapper Check program. The easiest way to submit the report is with the Alabama Department of Conservation and Natural Resources’ Outdoor Alabama app, available for both iOS and Android users. The fish must be reported prior to the fish being taken off the boat or the boat hauled out of the water. Only one report is required for each vessel landing red snapper in Alabama.

Alabama’s artificial reef program is unparalleled, which gives anglers fishing off Alabama access to the best red snapper fishing in the world. Don't hesitate to plan a trip to the Alabama Gulf Coast to catch and dine on a delicious red snapper, Alabama’s premier reef fish. 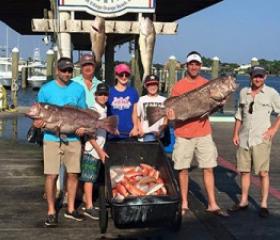 What's Biting: Get schooled on a charter

The extended Alabama Red Snapper season closes on Friday. Do you want to go trolling around the nipple or elbow area? The water more closely resembles...