Little Lagoon has always been a special place for me. It’s where I caught the largest speckled trout of my fishing career many years ago. 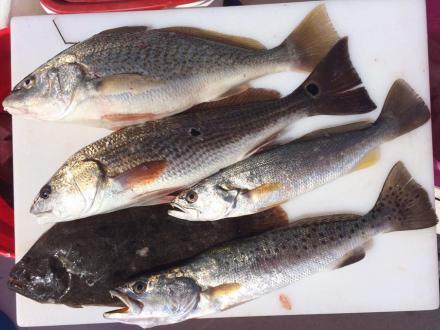 Little Lagoon is one of those places where you have the opportunity to catch almost any of the inshore species found in Alabama, and you can get out of the wind, which is especially important when those cold fronts with north winds roll through.

The Lagoon is a half-mile-wide body of brackish water in Gulf Shores separated by about a half-mile beach from the Gulf of Mexico. Little Lagoon Pass is a small outlet to the Gulf, the lagoon’s lifeline to water flow and water quality. The pass was dredged and widened several years ago to increase the flow of saltwater into and out of the lagoon to improve the water quality. This also tends to improve the fishing. The increased volume will form new sandbars in the lagoon, which will become new hideouts for those inshore species.

Speckled trout, white trout (some up to 16 inches), redfish and flounder can be caught in the lagoon on minnow-imitation plastic jigs and Gulp shrimp.

The lagoon’s west end seems to be a little more productive this time of year, but it may take moving around and drifting until you locate the fish because there usually isn’t a consistent fishing pattern in the lagoon during the winter. It all depends on the weather, which usually is still pretty nice through November and into December.

And just because you caught fish in one spot yesterday, they may not be in the same place today. During the cooler months, the fish stay pretty much active all day long if there is at least a little tide movement. Now that the pass has been opened up it means the tidal flow is improved

Because Little Lagoon’s water is usually fairly clear light spinning tackle with 10-pound test line is the best choice. If you have access to live bait, try bull minnows, menhaden and alewives, by all means use it. As the water continues to cool, live shrimp is a more viable option because all those nagging pinfish and other small fish won’t steal the bait.

While some anglers will head to the pass to try a little wade fishing or fishing from the bank, most successful fishing is from a boat. The best boat ramp is at the relatively new Lagoon Park located 1.8 miles west of Hwy. 59 on Fort Morgan road.

But back to my largest trout from years past. I was fishing with the late Mike Young and late Mike Miceli. We were drifting through some of the pair’s favorite spots. We had put several smaller speckled trout in the boat when I picked up my spinning rod and reel spooled with 10-pound test line. I cast a live shrimp with a No. 8 treble hook. The bait had barely settled to the bottom when the shrimp was inhaled.

The rod bowed in a tremendous arc and we all knew it was a good fish. What type of good fish, nobody was sure.

“Redfish,” they said almost in unison.

What was certain was that I had to let the fish dictate the fight to make sure he didn’t pop that light line. Therefore, I did the big fish dance around Young’s fish-and-ski boat. After several circuits around the boat, the fish finally surfaced.

After one more trip around the boat, the big trout glided into the net and the celebration began.

The trout weighed in at 6 pounds, 9 ounces and measured 27 ½ inches long. Plenty of people have caught bigger trout, but this is my trophy. It hangs on my wall to this day.