With Cooler Weather Ahead, Get Ready for Fall Pier Fishing

Thankfully, the destruction wrought by Hurricane Michael did not impact the Alabama Gulf Coast other than providing refuge for some of those fleeing the Category 4 storm. Our thoughts and prayers are with our Florida Panhandle neighbors as they recover from the devastation.

Huge waves did roll ashore in the Gulf Shores/Orange Beach area, which had me concerned about the Gulf State Park Pier. I visited the pier last weekend, and the good news is there was minimal interruption to pier operations. The pier is wisely designed with removable floor panels, which dislodge during a significant storm to maintain the integrity of the rest of the pier. After the waves subsided, park rangers found 13 floor sections has been dislodged, and those were quickly put back into place.

Despite the roiled surf from the storm, the water at the pier has returned to its normal emerald green beauty. During the time those big waves were coming ashore, the ocean floor was churned up to create a bounty for those fish that live on crustaceans and other bottom-dwelling creatures.

Cooler weather has been a long time coming this fall, which means the pier fishing will remain in mostly a summer pattern because of the current high water temperatures. When the weather starts to cool, the Spanish mackerel and king mackerel will start their migrations back to the east toward the wintering grounds in south Florida. The Spanish tend to hang around a little longer than the kings.

The fall pattern begins when the water temperature finally gets below 70 degrees, and the fishing for numerous inshore species improves dramatically.

Whiting, redfish and flounder fishing picks up considerably, not to mention one of the most prized surf catches – pompano. Cooler weather will make the fishing even better.

Redfish, both slot reds (16-26 inches) and bull reds, will be hanging around the pier this fall and can be caught on live croakers, which were plentiful around the pier last weekend, fresh-dead shrimp and chartreuse-colored grubs.

Use pieces of fresh cut shrimp and a square of Fish Bites with a relatively small hook with light line for whiting and pompano. A favorite tactic for flounder is fishing bull minnows around the pier’s pilings, but don’t be surprised if a redfish takes the bait. Sand fleas (mole crabs), whether they come frozen from the bait shop or dig your own in the surf line, work well on pompano and redfish.

The great thing about the 1,540-foot Gulf State Park Pier is the three fishing zones it provides. You’ve got surf fishing near the beach, the Spanish mackerel and similar-sized species at the middle octagon and the larger species, like kings and bull reds, at the octagon on the end. Those fishing at the end of the pier will mostly use medium-heavy rod with a reel that can hold about 300 yards of 15- to 20-pound test line. If you head to the octagon in the middle or nearer the shore, downsize your tackle to your typical gear for speckled trout with a 7 ½-foot rod and reel that can hold up to 150 yards of 12-pound test line.

Another great feature of the pier is there’s room for everybody with 2,448 feet of fishing space. 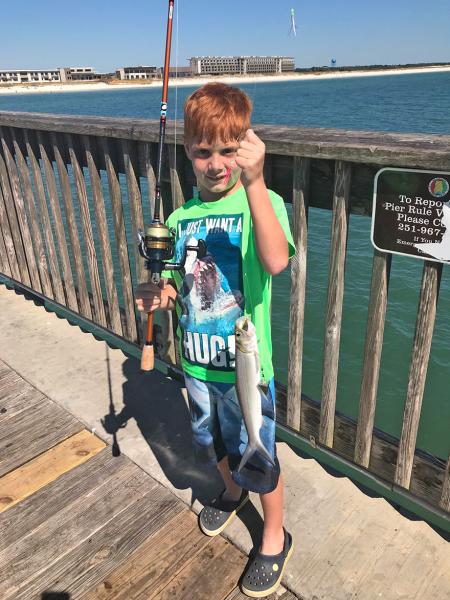