Run Off Your Eats at Shrimp Fest 10k

Foodies flock to Gulf Shores for the National Shrimp Festival. The aptly named four-day event will once again hit the white sand this October.

More than 300,000 people will savor succulent seafood as well as many other types of eats sure to please every palate. In addition, 80+ hours of musical entertainment and almost 200 booths of fine art and arts and crafts will also be featured. 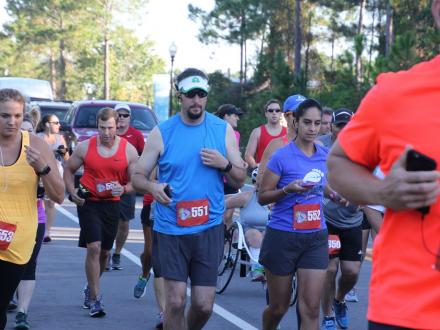 During the long weekend of indulgence on food, music and art, we’ve got a way for you to work off all the calories consumed. On October 14, we’re heading off to the races with festival-goers at the 2017 Shrimp Festival 10K and 5K Run at the Orange Beach Sportsplex. Plan on joining runners and walkers at the starting line of this officially sanctioned event of Shrimp Fest. The 10K race begins at 8 a.m. and the 5K begins at 8:20 a.m.

After you cross the finish line, you’ll deserve to treat yourself all over again. Scrumptious replenishment certainly won’t be far away at Shrimp Fest.

Not only is this a good opportunity to put your athletic abilities to the test, but the proceeds will be donated to Coastal Baldwin Education Enrichment, which will benefit Gulf Shores and Orange Beach public schools. You’ll run knowing you’re supporting a good cause! But you are also welcome to come out to watch and encourage those participating.

The history of the annual National Shrimp Festival Run dates to 1977, when it was a simple five-mile race that started and ended at Bayou Village in Gulf Shores. By participating in the race, you’ll become a part of a local tradition.