Why to report your red snapper catch

With the opening of red snapper season this week, the state of Alabama wants to know how many red snapper you caught. They aren’t just curious; they want real, hard numbers. That’s why they are requiring Alabama anglers to report their red snapper catch this year and for a good reason.

Recreational vessels with red snapper on board must report their fish prior to landing in Alabama. Prior to landing means before you pull your boat out of the water or unload your ice chest containing red snapper.

Chris Blankenship, Director of the Alabama’s Marine Resources Division, loves to snapper fish as much as anyone else. He also understands that fishermen by nature are a secretive lot. He wants to let everyone know why reporting is being required. “We want to be able to supply the federal authorities with as much accurate data as possible about the red snapper fishery off our coast.” Blankenship also says there is no better group to supply the data than recreational anglers. “Who better to give the best information than the ones actually out there catching the fish.”

Blankenship says Alabama simply wants to portray the fishery exactly for what it is. “We are not trying to skew the numbers in one direction or another. We require the reporting of red snapper caught so we can provide the actual number of fish being caught. Whatever that number is will allow the state to negotiate with the federal government and hopefully impact the way red snapper are managed in the Gulf of Mexico.”

The state has made reporting very easy. There is a free app available for Apple and Android phones. Anyone on the boat can file the report. You will need to have either the boat’s state or Coast Guard identification number, the number of anglers, and the number of fish caught, released dead, or eaten by a dolphin or other fish. You are not require to report of the size of the fish or where they were caught.

If you do not have a smart phone, you can call in your report to 1-844-REDSNAP.

Also, there will be forms and drop boxes at boat launch facilities. If you use a paper form, just keep the yellow copy, so you can provide proof that you filed a report should you be checked later on.

Alabama will also have officers and biologists at boat launches and marinas to help assist in the reporting process. Blankenship stressed that even if you are checked by an officer, you still need to report your catch. “The reason we have officers checking in with anglers is so we can validate the catch that has been reported. We don’t want to under or over report the numbers. The more verification procedures we have in place will result in fisheries managers having more confidence in our data.” 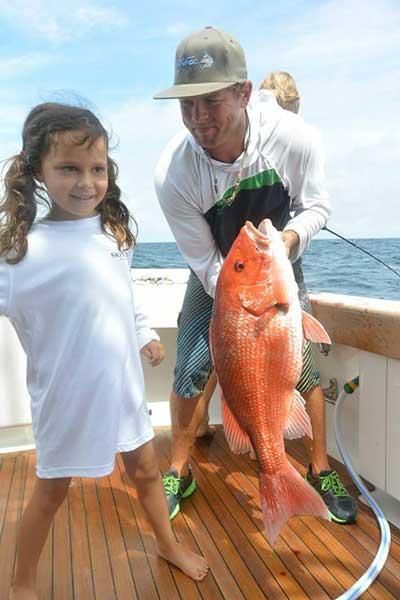 When you catch a red snapper like this one by Ramey Haley, make sure you report it to the state of Alabama.

6 Ways to Stay Cool on the Golf Course this Summer

Feel the gentle Gulf breeze coming off the beach as you line up your shot at Kiva Dunes. Kiva Dunes has more than 7,100 yards of play area and offers...