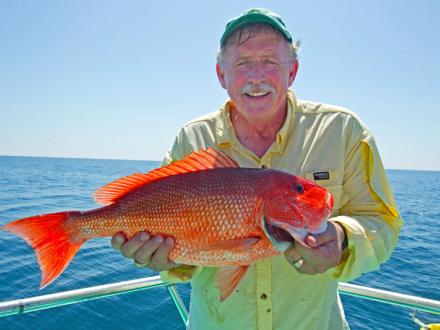 Two weeks from today, many of us will be hopefully headed offshore on the first day of the Federal red snapper season. For recreational anglers (fishing from your boat or any other not-for-hire boat) fishing in Federal waters, it’s another short season from June 1 through June 9. Federal waters begin, passed the Alabama designated state waters of nine miles from shore.

For those fishing on one of our many local charter boats, the season is much longer. Federally permitted charter boats will be able to catch red snapper from June 1 through July 15. For those thinking they might want to book a trip during their summer vacation, I would advise you to do so quickly. Many charter boats I have spoken with have limited days remaining for the upcoming season.

The Federal seasons are similar to last year, but there is a big difference in the Alabama red snapper season this year. State waters will open for the recreational harvest of red snapper on Friday, May 27 and continues through Sunday, July 31.  Last year, the state recognized the move of Alabama state waters from three miles to nine miles offshore, but the Federal government did not.

“This is the first year the federal government is recognizing our state waters as being extended to nine miles,” said Chris Blankenship, Alabama’s Director of Marine Resources. The new boundary opens up public reefs for fishing during the state season, which previously were not within the three mile boarder of state waters. Blankenship and his staff want everyone to be able to find those snapper spots. “We have a free file download (KML file) on our website that opens in Google Earth that shows not only the nine-mile boundary but also our state reefs within our state waters.”

After downloading and playing around with the tool, I quickly realized it is very easy also to check any of your favorite fishing numbers to see if they are in state waters. Simply move the cursor to your coordinates and you can determine whether they are either north or south of red state line on the map.

In addition to adding more days, with more water to fish, Alabama would also love nothing more than to help about 750 of us offset some of the costs of a trip this year. Like anything with fishing, you’ll have to get a little lucky. A key factor in getting an accurate stock assessment of red snapper is obtaining actual fish mortality data. Currently, fish mortality used by the National Oceanic and Atmospheric Administration is only an estimation.

“We are always trying to obtain real data to assist any decision made regarding red snapper management,” said Blankenship. “That is why we have placed tags in 750 different red snapper. These fish of all sizes were released on reefs from nearest to the shore all the way out into deep water.” In partnership with the University of South Alabama and Auburn University, anglers who catch a tagged red snapper will receive $250 for returning the tag and information to Alabama Marine Resources.

Blankenship also wants to remind everyone that it is mandatory to report your red snapper catch, whether caught in state or Federal waters. It’s a process that takes less than a minute to do when using the Outdoor Alabama app on your phone. Providing the state of Alabama with actual red snapper data will only lead to better decision making for the fishery in future.