Fishing along the Alabama shoreline was something that I never imagined myself doing, until the fishing bug bit me. I had experienced a lot of fun adventures in the Orange Beach and Gulf Shores area, but I had never fished off the Gulf State Park Pier until last week. I quickly learned that there were three important things to make note of before you throw out your first cast. 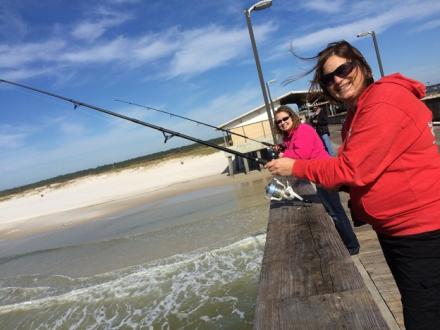 If you are like me, you travel light. Fishing gear is something that will not fit in my carry-on luggage. You can rent fishing poles and gear down at the Gulf State Park Pier for a four-hour time frame. Bait and fishing licenses were available at the bait shop, which was conveniently located next door to the place where I rented my fishing poles. The location of both makes sense and it made for a fantastic experience of fishing off the Gulf State Park Fishing Pier.

This fishing pier is like many others I have visited, as there were several regulars fishing on the day I visited. These fishermen knew their fish and they offered great tips for me. The best tip they gave me was that I did not have to feed the whole Gulf, as it’s not smart to put a whole shrimp on the hook. Well, this gal from the North was used to baiting a hook with a full worm, not half of a worm. These locals were also very kind. I witnessed a fisherman offer his pole to the woman fishing next to him, as he wanted her to have the experience of reeling in a fish.

If you do not even like to fish, trust me, you will have the time of your life fishing off of the Gulf State Park Pier. I laughed and had a great time baiting those hooks with shrimp and reeling in the empty hooks. The blue herons were fun to watch as they flew by and even took a dip into the water now and then. Watching the experienced fishermen around me reel in those red fish was a view in itself. Sightseers are welcome to stroll the pier and restrooms and concessions are available. It’s also one of the longest piers on the Gulf of Mexico.

I did not catch a fish while spending a couple hours out on the Gulf State Park Pier in Gulf Shores, Alabama. But I can tell you that I had a blast trying an activity that was something out of the ordinary, and it is something I will definitely try again. The pier gives you a spectacular view of the white, sugar-fine sand that the Alabama coastline consists of. I don’t know about you, but I’m ready to bait that hook again and toss the line off the Gulf State Park Pier and see what I can reel in.

Sara Broers (1323 Posts)
Sara Broers is a travel enthusiast that resides in North Iowa. Sara has fallen in love with the Alabama coast line and believes that the Alabama Beaches are the best in the United States. To keep up…