Screaming crowds, showers of beads and Moon Pies, along with floats accompanied by marching bands, can only mean one thing: Mardi Gras has arrived! 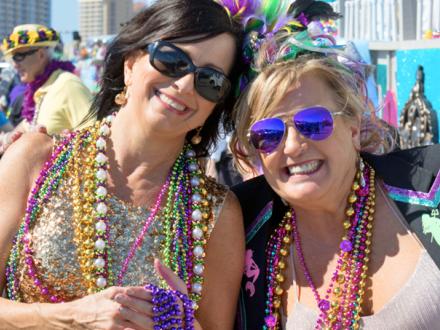 Screaming crowds, showers of beads and Moon Pies, along with floats accompanied by marching bands, can only mean one thing: Mardi Gras has arrived! More than just a day, Mardi Gras is a season of revelry before the Christian season of Lent, a time of fasting and penitence. This year’s celebration culminates on Mardi Gras day (literally translated as Fat Tuesday) on Feb. 9.

Mardi Gras has its origins on the Alabama Gulf Coast. Mobile is, in fact, the birthplace of the Carnival season in the United States, but the merriment is part of several cities along the Alabama coastline. The fun and parades start right after Christmas this year when the area’s first parade of the season, Krewe de la Dauphine, rolls at 1 p.m. Jan. 9 on Dauphin Island. Following quickly on its heels are the Island Mystics and the Order of the Rolling River parades on Jan. 16 beginning at 1 p.m. and 2 p.m., respectively, on Dauphin Island.

Mobile kicks off its Mardi Gras season when the Conde Cavaliers take their parade to the people Jan. 22 at 6:30 p.m. The next three and a half weeks are filled with parades that stretch from one end of the Gulf Coast to the other. Many people enjoy staying on the Baldwin County side of Mobile Bay and attending parades in Gulf Shores, Orange Beach, Foley, Daphne and Fairhope.

Of special interest are the parades on Pleasure Island. The Gulf Shores Parade on Feb. 9 is a great time to be part of the crowd when beads, Moon Pies and other trinkets are sailing through the air. Approximately 70 units are in the parade that travels south on Alabama Highway 59 to East Beach Boulevard. If a boat parade is more to your liking, head on over to LuLu’s to watch the Mardi Gras parade on the Intracoastal Canal. 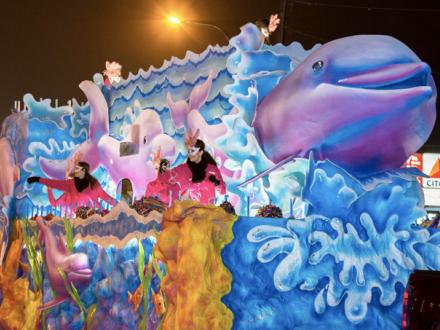 Orange Beach winds up the Mardi Gras season at 2 p.m. Feb. 9 with its own parade revelry that begins at Wintzell’s and continues to Alabama Highway 161.

Put on comfortable walking shoes, grab your hat, coat and gloves, and don’t forget the shopping bag for goodies. Get to the parade early, savor some Southern treats and enjoy the procession of parade-goers.  Half the fun of attending Mardi Gras is staking out your spot and relishing the atmosphere and excitement of Mardi Gras. Laissez les bon temps rouler (let the good time roll)!